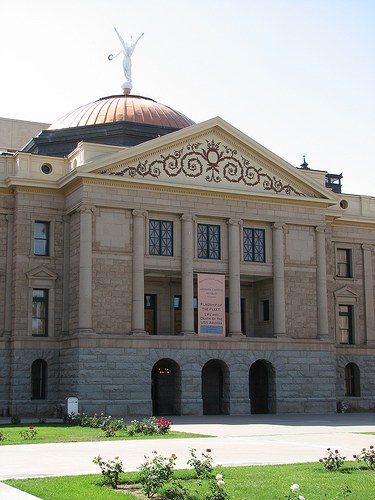 Just weeks after Mississippi’s lone abortion provider received preliminary injunctive relief to stay open by a federal judge, the Center for Reproductive Rights and the ACLU of Arizona filed a lawsuit with hopes to receive a similar injunction against Arizona’s new anti-abortion restriction.

But the women of Arizona were not afforded that relief.

U.S. District Judge James Teilborg dismissed the Center and ACLU’s request on Monday, upholding Arizona’s contentious 20-week abortion ban and permitting the law to go into effect this Thursday, August 2. Lawyers from the Center and ACLU filed an emergency appeal with the Ninth Circuit Court of Appeals today, and it’s slated for a hearing on Wednesday. If rejected, Arizona will have the abortion ban with the earliest gestational age restriction in the nation.

Arizona’s law, which was easily passed by the state’s anti-choice legislators and signed by Gov. Jan Brewer last April, outlaws abortions at 20 weeks from a woman’s last menstrual period (LMP). Eight other states that purport to have 20-week bans actually prohibit abortions at 22 weeks from the last menstrual period–or 20 weeks post-fertilization. The term “post-fertilization” is not recognized by the medical community, and LMP is the most accurate way to date pregnancy.

Teilborg ruled that the Arizona law doesn’t violate the 24-week precedent set in Roe v. Wade with this reasoning: He declared that the law still allows women with life-threatening pregnancies to have an abortion after 20 weeks. To the judge, this means the 20-week ban doesn’t put an “undue burden” on women.

The judge also stated that he believes in the notion of fetal pain beginning at the 20th week of pregnancy–an anti-choice myth that has not been accepted by any contemporary medical journal. This unsubstantiated reasoning, according to Teilborg, means the state has a compelling interest in protecting the fetus.

According to the Center and ACLU, the ruling ignores constitutional precedent, let alone health risks for women under the Arizona law. The law states that abortions at or past 20 weeks can only be performed on a woman to “avert her death” and can only be done as preventive measure if “irreparable bodily harm” will occur. Good luck to pregnant Arizona women who need abortions in order to prevent “reparable” body harm.

Since 2010, when Nebraska passed the nation’s first 20-week post-fertilization abortion ban, a woman’s right to choose up until 24 weeks has been hanging by a thread in parts of the country. Eight states followed Nebraska’s lead over the last two years, and other pre-viability abortion bans are likely on the way. The Michigan state senate will vote next month on an omnibus bill that includes a 20-week ban.