The Brainy Message of ParaNorman - Ms. Magazine
Skip to content 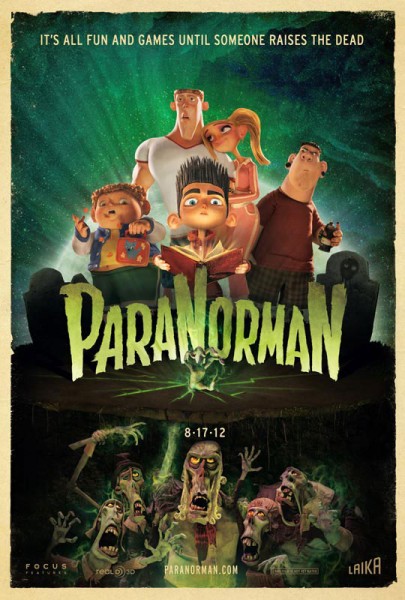 Got a thing for zombies? Have some tween-age children in your life? Do you like whizz-bang stop-motion animation? Or, perhaps you are one of those types who appreciates a well-developed cast of characters that kicks stereotypes to the curb, features strong women and–can it be true?!?!–has a positively depicted openly gay character. If so, get thee to a theater and see the little-buzzed-about but much deserving ParaNorman–a zombie film not only with brains but a lot of heart.

Displaying it’s cleverness and attention to detail with tongue-in-cheek nods to horror films in general and zombie mania in particular, ParaNorman, which opens in wide release Friday, offers a number of sly critiques of cultural norms. Soon after meeting the spiky-haired but soft-hearted Norman and his wise-cracking dead grandma, we meet the dad, who is mocked for his stereotypical views of “limp-wristed hippy garbage” and for berating Norman about his supposed abnormalities.

What makes Norman abnormal, from his conservative father’s viewpoint, is his ability to see and converse with dead people; but what makes him wonderfully better-than-normal is the fact that he resists norms, befriends outcasts (both dead and alive) and says things like: “When people get scared they say and do terrible things” and  “They did something awful. That doesn’t mean you should too.” His insight that making others suffer is not the answer to injustice is a key message of the film, along with the equally important emphasis on doing away with preconceived notions about who is “good” and what is “normal.”

Stereotypical expectations are undercut when the annoying older sister, Courtney, turns out to be Norm’s savior. Her insistence that, “You all need to stop trying to kill my brother. You are adults!” nods to yet another point made in the film: that adults don’t necessarily know better, especially “normal” adults or those with authority, like dads, teachers and cops.

While father figures are usually more heroic in children’s films and mothers are either dead or monsters (or both), this time around it’s Norman’s mother who is the non-monstrous parent. However, both parents take sidelined roles to the standout Scooby-gang that saves the day–Norman, his wonderfully quirky friend Neal, the seemingly typical-jock Mitch, sis Courtney and tormented bully Alvin. All of these characters are stock types, yet by the film’s end each character has disproven stereotypes. Most surprisingly, the uber-muscular “dumb jock” turns out to be gay–revealed by the line “You’re gonna like my boyfriend; he’s like a total chick-flick nut.” With his character and others, the film lures us into believing it’s perpetuating stereotypes only to pull them out from under us.

This undercutting of preconceived notions is also made via the fact that the zombies and witches are not sources of evil: The “average citizens” of Blithe Hollow are. As the citizens turn into a zealous lynch mob, they serve as a metaphor for our own cultural tendencies to shout “terrorist” before we have assessed where the real threat/fear is coming from. In fact, the centuries-old “curse” in the film turns out to be one big misunderstanding (a misunderstanding that those in the know about witches will recognize as a clever nod to the way the categorization of “witch” was wielded to denigrate women and Others perceived as a “danger” to the normal patriarchal way of doing things). Yes, just as in Arthur Miller’s The Crucible–but this time in 3D!

On that note, I must give a shout out to the very smart Salma, a standout secondary character who carries around a book called My First Nuclear Fusion Reactor and asks why witches are always depicted in historically inaccurate ways as hideous with pointy hats. While I wish she had made it into the Scooby-gang, the fact that Norman and Neil look to her as a go-to person for advice is a lovely nod to the notion that intelligence and heroism do not reside in a specific gender.

The film is filled with timely satiric highlights–as when the cop asks the townspeople, “What are you doing firing at civilians? That is for police to do!” The film mocks the hollowness of consumer-crazed Blithe Hollow, a town that trades in the “witch’s curse” and, in so doing, curses itself to consist of zombified consumers who are as ready to kill as they are to eat and shop. Hmmm, remind anyone of…Americans?

Alas, I don’t understand the complaint lodged by Boxoffice that this film is “in no way appropriate for kids.”  Tossing aside the strong anti-bullying and forgiveness-is-good messages of the film, the reviewer warns, “Nightmares and bedwetting are bad. But teaching your kids to take death casually is just bad parenting.” Guess I missed the film’s memo about taking death casually as I was too darn focused on the way prejudice, vengeance and normality are depicted as the true nightmares of Norm’s world–and our own.

Photo of ParaNorman poster from the film’s IMDB page.