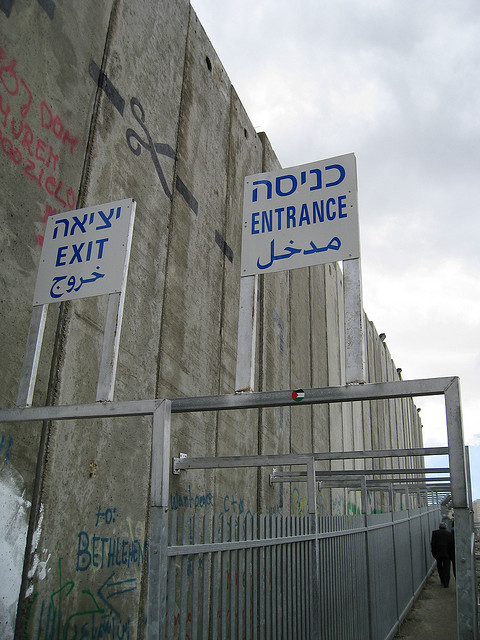 On a warm Saturday morning, 15 Jewish Israeli women drove their cars into West Bank Palestinian towns and villages. There, more than 30 Palestinian women and children carrying pots of home-cooked food entered the Israelis’ vehicles. The Palestinians, dressed in jeans or Western-style skirts, removed their head scarves for the journey.

As the cars approached the border checkpoint to Israel, the passengers simply smiled at the young Israeli soldiers who, seeing Israeli license plates and kids in the back seat, waved them through.

Within a half hour, the women were in predominantly Jewish West Jerusalem, at a park popular with both Jews and Arabs. After setting down their pots–overflowing with savory chicken, lamb and rice–the Palestinians shyly introduced themselves to a group of young Jewish mothers, most of whom had traveled from Tel Aviv. Seated on Bedouin-style straw mats, they encouraged the Palestinian children to join the Jewish kids in arts-and-crafts projects. To the casual observer, this was a gathering of friends. To the participants, it was a bold act of civil disobedience.

“We are breaking the law and challenging Israeli policy in a very symbolic way,” says Ilana Hammerman. It was her solo decision, in 2010, to bring young Palestinian women to Israel for a day at an Israeli beach that inspired the other women activists.

It also brought unwanted attention from the Israeli authorities.

What started as Hammerman’s private initiative (“Many Israelis do such things for humanitarian reasons,” she says) hit the national headlines in May 2010, when the 67-year-old editor, translator and political activist wrote an article describing why she risked arrest to bring Palestinians to Israel.

After a woman’s organization invited Hammerman to lecture about the experience, 11 women, ages 50 to 70 mostly, joined her. Together they formed the group We Will Not Obey.

By the start of 2012, Hammerman says, the group had organized about a dozen joint activities with Palestinian women from the West Bank: trips to the beach, to the Jerusalem zoo, to a stalactite cave, to a gourmet rooftop dinner in Tel Aviv. Today, up to 60 women participate. Though initially tentative, even uncomfortable with one another, the Israeli and Palestinian women have found common ground.

“A lot of relationships between the Israeli and Palestinian women have become closer and closer,” Hammerman said as she watched the Palestinian women–who spoke only rudimentary Hebrew and just a bit of English–struggle to communicate with the Israelis, only a handful of them Arabic-speakers.

But with Arabic-speaking Israelis as translators, the women talked about their lives in Bethlehem or Tel Aviv. Despite the language barrier, friendships have flowered. Not long ago, an Israeli member of the group transported a sick Palestinian child and his mother to an Israeli hospital after the government denied her request for an entry permit. Another brought a Palestinian woman to visit her aunt, hospitalized in Israel.

According to Israeli peace activist Gershon Baskin, former director of the Israel/Palestine Center for Research and Information, there are dozens of Israeli-Palestinian co-existence groups, but “We Will Not Obey is, to my knowledge, the only one that brings Israelis into the West Bank and Palestinians into Israel illegally.” Baskin has personally entered areas the military says is off-limits to Israelis,  but he never did so in his capacity as head of a registered Israeli NGO. He calls the group’s members “very courageous.”

Hammerman, who notes that her group isn’t a formal NGO, says the participants feel the fear and do it anyway. The police have, so far, questioned 28 of the Israeli activists but haven’t formally charged them. Hammerman has been questioned three times but refuses to hand over the Palestinian women’s names.

The group’s critics say the women’s actions threaten the country’s security–terrorists who have committed attacks over the years usually hailed from the West Bank or Gaza Strip–and are an attempt to tarnish Israel’s reputation. The activists reject this.

Diganit,* a first-time participant from Tel Aviv, drove more than an hour to the picnic with her toddler. “How can we make peace if we don’t know each other?” she asks. Says Sara, another first-timer, “As the mother of three boys who will serve in the Israeli army one day, I’m trying to figure out where I fit into the fabric of Israeli society.”

This was the fifth encounter with Israelis for Rayna, a Palestinian who comes from a village not far from Bethlehem. “I wanted to enjoy the free air and I wanted my kids and Israeli kids to play together,” she says, explaining why she had again braved the checkpoints. “All the women here are my friends.”

Fatima, a mother of four, met the Israelis for the first time: “I was afraid when we arrived at the checkpoint. Not afraid of the Israelis, but of being jailed. But I did it to break through the barrier of fear and to break down prejudices.”

Hammerman, the daughter of Holocaust survivors, said her parents taught her “to always look around–and never to shut up.” She adds, “That’s why I’m here.”

*All names except Hammerman’s have been changed for security reasons.