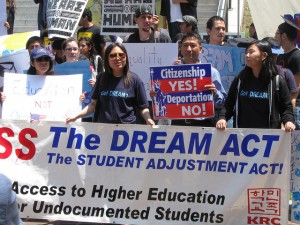 Since the spring of 2010, when Arizona enacted S.B. 1070 (the harshest immigration law in the country), lawmakers and immigrant rights advocates have worked both to weaken the controversial law and to ensure that the rights of immigrants are protected elsewhere. In June 2012 the Supreme Court blocked much of the Arizona law on the grounds that it interfered with the federal government’s ability to determine immigration policy, but upheld the provision requiring state police to determine the immigration status of any person they stop or arrest if they have any reason to suspect the person may be in the country illegally.

June 2012 continued to bring positive developments. On June 15, the Obama administration announced that it will provide “deferred action” to immigrants who entered the United States as children and who meet a series of requirements that would allow them to temporarily stay in the country without risk of deportation. This action will help undocumented youth remain in the U.S. while they await a more longterm solution promised by the proposed DREAM Act.

In the upcoming November election, voters will make life-altering decisions affecting undocumented immigrants at the state level, either extending their rights or diminishing them. If you live in Montana or Maryland, the following issues will be on your ballot:

Referendum 121 would deny state services such as financial aid, state licenses and disability aid to undocumented immigrants. Under this legislation, any individual seeking a state service–such as unemployment, disability benefits or aid for university students–must provide evidence of U.S. citizenship. If the person seeking services is not a citizen, he or she must provide proof of lawful immigrant status or have his or her status verified through a federal database.

If the referendum passes, state agencies will be required to notify the U.S. Department of Homeland Security of immigrants who have entered or remain in the country without documentation and who have applied for state services.

Question 4 is a referendum petition on a newly passed state DREAM Act. If passed, it would establish in-state tuition fees at community colleges in Maryland for all individuals living in Maryland, including undocumented immigrants, provided that the student meets specific conditions regarding attendance and graduation from a Maryland high school. It would also make such students eligible to pay in-state tuition fees at four-year public colleges or universities if they have completed 60 credit hours at, or graduated from, a Maryland community college.

Flickr photo by the Korean Resource Center via Creative Commons 3.0.