The following interview is excerpted from the Summer 2014 issue of Ms. Click here to get a copy!

It would be an understatement to say that Nigerian author Chimamanda Ngozi Adichie has had an impressive year.

Where to start? Perhaps with the publication of her third novel, Americanah, a tri-continental love story that won the National Book Critics Circle Award. Meanwhile, her second novel, Half of a Yellow Sun—centered on the Nigeria-Biafra War of 1967–1970—was made into a film that will be released early this summer in the U.S. And she delivered her second TED talk, “We Should All Be Feminists,” which not only has been seen by nearly 900,000 viewers on YouTube but was sampled by Beyoncé in her song “***Flawless.” Coming full circle, the film rights for Americanah have been optioned as well.

“Americanah,” referring to a Nigerian who has lived abroad in America before returning home, aptly describes Adichie’s current status, as she splits her time between the two countries— teaching in Nigeria and residing with her husband in Baltimore.

The 36-year-old grew up in an Igbo family of educators in the university town of Nsukka, where she developed an early love for writing. She moved to the United States at age 19 to continue her education and in 2003 published her first novel, Purple Hibiscus, to critical acclaim.

Ms. has been avidly following her literary career since 2006, reprinting two of her short stories. Now, she’s not only one of the foremost writers of the day but a feminist role model, inspiring everyone from young girls to the world’s biggest pop star with such words as these from her TED talk:

“We teach girls to shrink themselves, to make themselves smaller. We say to girls, ‘You can have ambition, but not too much. You should aim to be successful, but not too successful.’ … Feminist: the person who believes in the social, political and economic equality of the sexes.”

Ms.: Do you think of yourself as a feminist writer?

Chimamanda Ngozi Adichie: I think of myself as a storyteller, but I would not mind at all if someone were to think of me as a feminist writer. Sometimes I find myself pushing against labels, only because they can become prescriptive. But at the same time, I’m very feminist in the way I look at the world, and that worldview must somehow be part of my work.

Ms.: As someone who lives in both the U.S. and Nigeria, what would you say are the biggest challenges that women face in either country?

Adichie: I think, politically speaking, reproductive rights is the biggest challenge for women in America, but for Nigeria, it’s mostly cultural. Women occupy positions of power, but there are so many cultural attitudes, like teaching girls that marriage and motherhood are the most important things, and young women and girls hold themselves back because they believe they must do this to be desirable. There is so much untapped potential and talent that we’re losing over these attitudes.

Ms.: We could argue that women in America face these same challenges.

Adichie: Well, in Nigeria, we haven’t really talked about these issues. When we talk about women’s rights, it’s always some man saying, “We’ll set aside five seats for women in the House of Reps.,” and that sort of nonsense. Whereas in the U.S., it’s even more insidious because there is this belief that everything is fine. It’s a story a culture tells itself, especially when someone says, “Well, we may have some problems, but it’s really bad in Africa.” And I think that’s not true because I’ve found that many Western women buy into the idea that the ultimate, most important goal is still motherhood and marriage, and I’ve found even feminist American women who will settle, even when they’re not satisfied in their relationships.

Ms.: I think that’s what’s interesting about the main character, Ifemelu, in Americanah. She has romances with men—both white and black—but she doesn’t settle when she is not satisfied in her relationships.

Adichie: Yes, and I think that’s something that all cultures in the world teach women: We teach women to settle, to be grateful. If we reversed the roles, and Ifemelu were a man, her actions wouldn’t be remarkable because the world allows men to behave this way.

Ms.: Your novel relied on satire at times, especially through Ifemelu, who starts a blog about race in America, and she blogs about everything from hair to interracial romance to the Obama election. What commentary are you trying to make about racial politics, about Internet culture?

Adichie: There’s something about the blog form that I find interesting. There’s an urgency that blogs can have, which I enjoy very much. At the same time, it can easily become careless writing, and you often find ideas in blogs that are not really backed up with any kind of rigor. So in the novel, I wanted to introduce the blog as a way to write about race and to do so in a way that makes fun of it. Race is still a very important subject, but I wanted Ifemelu to be able to write about it in a way that would not have worked if she were writing a newspaper column. …[K]eeping a blog tells us something about the way we live our modern lives.

Ms.: I read that Lupita Nyong’o—who received this year’s best supporting actress Oscar for her work in 12 Years a Slave— expressed interest in Americanah.

Adichie: Yes, the rights have been optioned by the lovely Lupita Nyong’o. One of the things I’m very happy about is that she read and loved Americanah long before she became famous.

Adichie: I think she would. I hope it happens.

Ms.: Speaking of film, what are your thoughts on the film Half of a Yellow Sun?

Adichie: I was very moved by it. The film is very faithful to the book, and the performances are wonderful, and it was filmed in Nigeria, which I really love.

Ms.: There was some controversy with the casting of Thandie Newton as the main character, Olanna.

Adichie: I think most of the controversy was that Thandie Newton didn’t look Nigerian, which I thought was nonsense. In the book, I had envisioned Olanna as light-skinned. There was a time in Lagos when, if you were light-skinned, you would be in danger because people thought you were Igbo, and in my own family, I have a younger brother [who] people in the U.S. would think was Hispanic, and I have a sister who is very dark and could be mistaken as a Southern Sudanese, and that’s in the same family. So this idea that a Nigerian looks a certain way is absurd. But I also understand the issues around not casting an actress from Nigeria, and I’m sympathetic to that. But this is a film, and she’s a black person; how about we see this film as a start and support that? And Thandie Newton’s performance is so good, it’s the best way to silence the critics.

Ms.: These conversations around nationality also came up when 12 Years a Slave featured African actors playing African American characters. Of course, we don’t have problems when an Australian actress like Cate Blanchett portrays an American woman, only when it comes to black actors.

Adichie: Absolutely! But if we’re going to say, well, Lupita is Kenyan and so she can’t play an African American, I’m thinking: The slave woman she’s playing probably looked exactly like Lupita. Of course, these conversations are political; they’re not about performance or art. But I do think that because Thandie Newton is biracial and light-skinned, that caused some problems for some people. I also feel that we need many more dark-skinned women in roles that are mainstream and glamorous, but that shouldn’t mean that women like Thandie must now become invisible as a way to correct a wrong.

Ms.: Of course these issues are raised in Americanah. Do you believe this novel can create a bridge in understanding and complicating the black experience, which is still often characterized as a mostly African American experience?

Adichie: I’m writing about what I know, but the idea of creating a kind of commonality is one that I like. I don’t think that African American culture began with the slave ship. I think for people of African descent, there’s a commonality in our histories and our experiences, but there are also different ways of being black. There’s a way that we talk about race that only imagines the experience as African American, which then becomes a single story. And if you’re black and coming to the U.S., there are certain things you’re expected to know, which you might not because you don’t know the history. But if my novel is being used to create bridges, and I have had conversations with others who say that’s happening, that certainly makes me very happy. 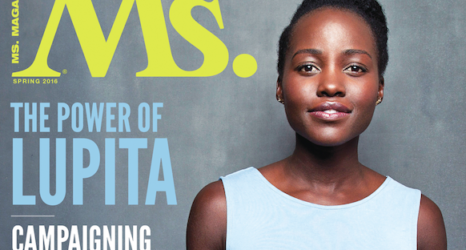 Lupita Nyong’o and the Value of Visibility

The Latest Issue of Ms. Is Here!

Weekend Reading on Women’s Representation: Black Women Are Already Front-Runners in Statewide Primaries; Efforts to Pass ERA Ramp Up
The Pro-Choice League
Generation Roe: Have We Always Known Roe Was an Aberrance Only Two Generations Would Experience?