It began on November 9. Less than 24 full hours after Donald Trump won the 2016 presidential election, members of communities who have often faced persecution and discrimination on the basis of their identities found themselves targeted by a spike in harassment and violence being perpetuated in the President-Elect’s name.

Let’s not parse words. These acts are atrocities. Muslims are being threatened and harassed on the street, and some are being physically brutalized. Little boys are grabbing little girls, for lack of a better phrase, “by the pussy.” Black children are being told to sit in the back of the bus. Mexican children are being taunted about their future deportations. Nazi imagery is appearing in public space and Jewish Twitter users are being targeted by users who concoct visions of the Holocaust and hurl them like threats over the Internet. Rainbow flags are burnings. Neighbors are leaving notes for their gay neighbors declaring that they are no longer welcome where they live. Graffiti appearing across the country asserts that Black lives don’t matter and Black college students are being forcibly added to threads on messaging apps chock-full of slurs and degrading comments about their community.

Meanwhile, the Klu Klux Klan is planning a celebratory rally for the President-Elect in North Carolina. Trans kids are killing themselves. Parents are struggling to reconcile the behavior of their nation’s future Commander-in-Chief and his supporters with the ideals of tolerance, respect and kindness that they intend to bestow on their children.

The one unifying factor in the midst of unmitigated emotional and physical brutality against marginalized groups? Donald Trump—and the campaign he waged for the presidency which unabashedly centered white nationalism, normalized rape and sexual assault, used immigrants as scapegoats and mocked people with disabilities while also encouraging violence perpetuated in his name.

Now, his supporters—who implicitly or explicitly identify with his own offensive and dangerous views on women, people of color and other marginalized identities—are emboldened to act on them. Richard Cohen of the SPLC told USA Today that “white supremacists are out there celebrating his victory,” adding that “many are feeling their oats.”

Donald Trump, after five days, said only two words about the widespread acts of violence and harassment happening in his name across the country he intends to “unify.” Those two words? “Stop it.” Needless to say, the statement is too little, too late.

Our President-Elect has spent the better part of the last two years inciting hate and condoning violence against marginalized communities he scapegoated for the very real challenges our nation is facing. The end result is hate and violence.

This is Donald Trump’s America. Nothing he says will stop him from being accountable for it. Now we must fight like hell to take it back.

Opinions expressed here are the author’s own. Ms. is owned by Feminist Majority Foundation, a 501(c)3 organization, and does not endorse candidates. 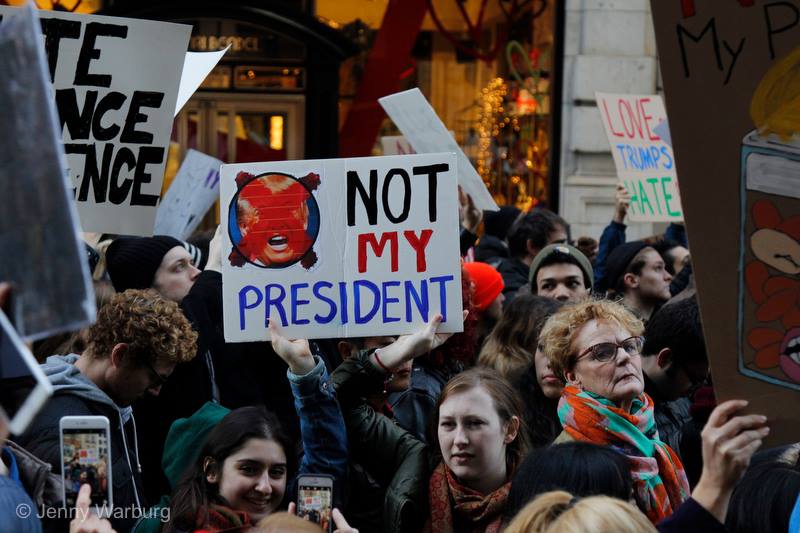