Views from the Frontlines of a Historic Candidacy and a Feminist Uprising - Ms. Magazine
Skip to content

I wasn’t on an official assignment when I set out to document Hillary Clinton’s presidential campaign; I was simply an enthusiastic Hillary fangirl who also happened to be a professional photographer. I began attending and photographing campaign events in my head-to-toe “Vote For Hillary’’ look in 2016. (My favorite shirt, which I designed myself, read “The Revolution Is Female.”) By the time the campaign came to New York for its primary in April, I had cultivated an engaged and public-facing space on social media where users published posts about our shared support for Hillary’s candidacy. I also used the space to share my photography and organize local meet-ups.

There was a revolution brewing in the United States—and millions of us were ready for her. On April 18, the day before New York’s primary, I made my way to the New York City Hilton to photograph Hillary’s Get Out the Vote rally. I arrived hours early with the hope of securing a spot near the stage, and when the time came to enter the Trianon Ballroom, I noticed a wave of excitement was underway. A group of supporters, including new friends, were being invited to stand behind Hillary’s podium.

I had a moment of indecision: Do I hold my highly coveted position at the front of the stage that I waited hours for, or do I cut loose and become part of the sign-waving backdrop of supporters in this historic moment? Of course, I chose the latter—and am so grateful for that spontaneous decision. The room erupted in cheers when the powerhouse of Democratic women began filing onto the stage: U.S. Senator Kirsten Gillibrand, former Rep. Gabrielle Giffords, former President of Planned Parenthood Cecile Richards and Hillary Clinton herself. Even better, I was also able to discreetly capture a few powerful photographs from my unique perspective. 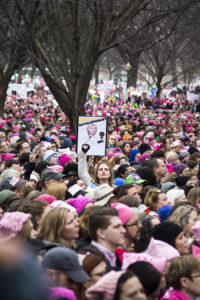 Photographing Hillary Clinton and her supporters in 2016 was the highlight of my life. We didn’t see Clinton supporters being represented in the mainstream media, but we were the majority. Clinton won the popular vote by millions, and though she lost the electoral vote narrowly, which was beyond painful, in the days and weeks following the election I saw women turning this pain into action.

Admittedly, I wanted to put down my camera and cry forever—but if Hillary was not going to give up, how could I? Our second chapter was just beginning, and I wanted to be there to document it.

This February, I decided to bring my election and resistance photography together into a coffee table photography book: The Revolution Is Female: A Historic Candidacy, A Popular Vote and a Feminist Uprising. (When I announced I was doing pre-orders for the book, Hillary herself tweeted about my effort; my pre-order minimum was exceeded by hundreds orders that same day, and my book went into production.)

I also included essays and quotes from women in the movement. One of my favorites is from New York State Senate Democratic Conference Leader Andrea Stewart-Cousins:

We are at an important crossroads for women in our state and nation.  The #MeToo movement has brought the scourge of sexual harassment and abuse of power out of the shadows and has awoken the consciousness of our society. Change is coming. Women are going to lead! 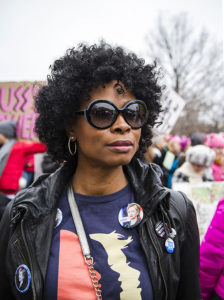 The Revolution is Female has a beginning and a middle, but no end. Instead, it has one more beginning—the launch of our future. I titled the three chapters “I’m With Her,” celebrating Hillary Clinton, her campaign and her enthusiastic supporters; “Resist,” representing the fierce feminist movement that rose from the ashes of an illegitimate election; and “Onward,” marking our persistence and progress as resilient women in politics, healthcare, arts, finance and beyond.

When women participated in the Women’s March movement, which would become the largest worldwide protest in history, we knew Hillary started something really big. Following the march, our momentum grew stronger, and women began to run for political office in record numbers, many for the first time. Last month, many of them won.

We are at an unstoppable moment in history for women. It is my hope that The Revolution Is Female will honor Hillary Clinton’s quest for an equal America—and provide a voice for the many who have fought, and continue to fight, for women’s rights and equality.

Click here to buy a limited edition gift set including The Revolution is Female exclusive to Ms. readers!

Kristen Blush has over 15 years experience in photojournalism and commercial photography. She's based in New York.