"I Care a Lot" Takes on the Girlboss - Ms. Magazine
Skip to content

What happens when the Girlboss is in the wrong? Who do we root for then?

In the twenty-teens, the “Girlboss” earned a share of popular culture. Pantsuits, self-help manifestos and “lean in” feminism coalesced around the ideal of a woman who found success through traditional avenues—think: Sheryl Sandburg—and looked damn good doing it.

I Care a Lot, a new Netflix dark comedy-thriller, seeks to skewer this trope. In the film, which was written and directed by J Blakeson, the autour takes aim at the dark underbelly of the Girlboss with a tale of an antihero who weaponizes feminist language to whitewash her greed—until it comes back to bite her.

The film centers on Marla Gray (Rosamund Pike, once again proving her mastery for bringing depth to the despicable), a woman in the business of exploiting the elderly. In an all-too-realistic sequence, we see her process of bribing a doctor to misdiagnose perfectly healthy elderly folk, convincing a judge to deem them incapable of making decisions for themselves, and usurping control over their assets and lives.

It’s a good grift, until she picks on the wrong little old lady. Marla meets her match when a seemingly feeble target, Jennifer Peterson (Dianne Wiest), turns out to have powerful ties to the Russian mafia, who have no qualms about playing as dirty as she does. Enter Roman Lunyov (Peter Dinklage) as the operation’s patriarch and a truly terrifying adversary. What follows is a plot that takes the Girlboss to her logical conclusion, replete with mayhem, murder and little moral ambiguity.

The film starts with something of a mission statement. “There’s two types of people in this world: the people who take… and those getting took,” Marla explains in the opening voiceover as we see her elderly victim withering alone in their court-mandated nursing home. This woman is her latest victim, who we are introduced to through her son begging for the right to see his mother. After the judge rules in Marla’s favor, the son accosts her on the street and spits in her face.

Minutes into the film, Marla yells back at the son of her latest victim, “Does it sting more because I’m a woman? That you got so soundly beaten in there by someone with a vagina?”

At face value, these lines seem like a gross appropriation of feminism, the screenwriter’s attempt to justify Marla’s behavior as the product of a sexist society. But this is a misreading of the moment, which is not a thesis of the film but rather a thesis of Marla’s character: a woman who herself may take or leave feminist values, depending on whether they serve her self-interest. A Girlboss.

Don’t get it twisted—I Care a Lot is more film noir than morality play. Sure, the script concerns itself with the institutional elder abuse, but the film is more interested in the woman behind the scheme. It’s replete with dark humor and high-adrenaline thriller sequences, and it’s delightful to watch Marla elude justice.

Marla takes on a cockroach-like invincibility, protected by her total lack of regard for doing the “right thing,” and her absolute refusal to lose so much as a tooth (literally—when a tooth gets knocked out in an accident, Marla schleps it around in a jug of milk until she can get to a dentist). It’s delightful to watch, but it’s hardly ambiguous: Marla is a Bad Guy.

Questioning the Girlboss can sometimes read as reactionary, as a vestigial, knee-jerk discomfort with women in power. At best, critiques point out that immorality is gender-neutral. At worst, attacks simply regurgitate the biases that have kept women disempowered for millennia—that women who dare to seek power are inherently greedy, selfish and bossy. But what happens when the Girlboss is in the wrong? Who do we root for then?

This is the question I Care a Lot asks. J Blakeson imbues our protagonist with no redeeming qualities (unless you count killer hair). You’d have to be a sociopath to root for our ruthless protagonist, but you’d have to be heartless to root for her opponent, too. That the Girlboss joins forces with the bad guys sheds light on the dark side of a culture that valorizes achievement without any consideration of whether those structures are worth succeeding in anyway.

In the final scene, after completing a fawning TV interview, Marla finally receives her punishment. On her way to her flashy sports car, Marla is accosted by the son of one of her victims—the man from earlier, who she rebuked with her Girl Power speech. The man who threatened to rape and murder her. After all her success, the man is back for revenge. He shoots her, and as she bleeds through her pristine power suit, he gets in the final word: “Fucking bitch.”

In the end, greed kills the Girlboss. But so does misogyny.

I Care a Lot isn’t a perfect film. There are plenty of plot holes—most notably, that a seasoned mafia boss who can fake his own death nonetheless has cronies incapable of executing a straightforward murder. The huge vape is weird, the second act drags on, and it’s a real shame that it seemingly slipped Blakeson’s mind to imbue Marla’s girlfriend, Fran (Eiza González), with a single discernible personality trait.

But I Care a Lot is a searing and thoughtful indictment of the Girlboss, and it is correct to point out the trouble with a woman who is so wrapped up in her self-empowerment narrative that she fails to consider—much less “care a lot” about—the people she hurts. The film covers new ground, and it’s exciting that a normie Netflix film can feature a same-sex couple without making it about their queerness. That Blakeson can depict a lesbian sociopath without it being seen as a statement on lesbian people at large is emblematic of the improved and diversified media representation of lesbians in recent years.

And it is a sign of progress that audiences are ready to hate Marla not for being a woman, or for loving another woman, but for the depravity at her core. It’s equal-opportunity evil. Just what our foremothers dreamed of.

Zoe Larkin is a student at Yale University studying Political Science and English. She is an editorial intern at Ms. 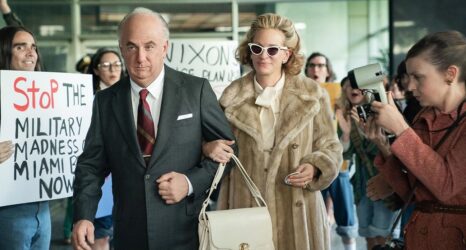