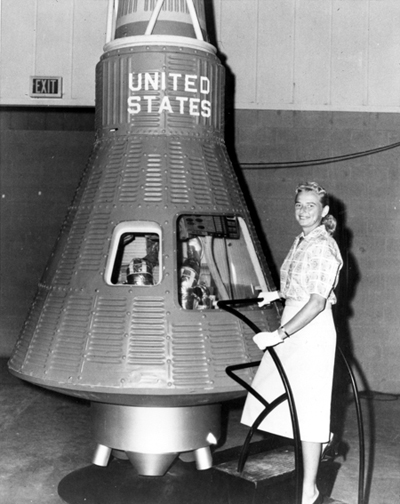 Hooray! Women are one small step closer to achieving gender parity in space. A record four women are now in space and will soon orbit Earth on the International Space Station. One woman is already at the station and the other three are on their way after NASA launched them this morning. The three are: Naoko Yamazaki, the second woman from Japan to go into space; Stephanie Wilson, who was already the second black woman in space; and Dorothy Metcalf-Lindenburger, a former high school teacher. They’ll meet up with Tracy Caldwell Dyson, a California native.

Metcalf-Lindenburger was inspired to go to space after a student asked her a question in class. According to the Associated Press:

A girl wanted to know how astronauts go to the bathroom in space, and Metcalf-Lindenburger went to the computer to find out. That’s when she stumbled onto NASA’s ad for educator-astronauts. “This is like the perfect job,” she told her husband. She applied and, several months later in 2004, was accepted. This is her first spaceflight; she will help operate the robot arm and coordinate three spacewalks from inside.

We hope this will herald more parity: As of now, only 54 women have been to space out of a total of 517 astronauts.

Above: Jerrie Cobb poses next to a Mercury spaceship capsule. Cobb, along with 24 other women, was part of the First Lady Astronaut Trainees, all skilled pilots, who underwent physical tests similar to those of the Mercury astronauts. Cobb ranked in the top two percent of astronaut candidates in the training exercises, women and men, yet never was given the opportunity to fly into space. Photo public domain, courtesy of NASA.