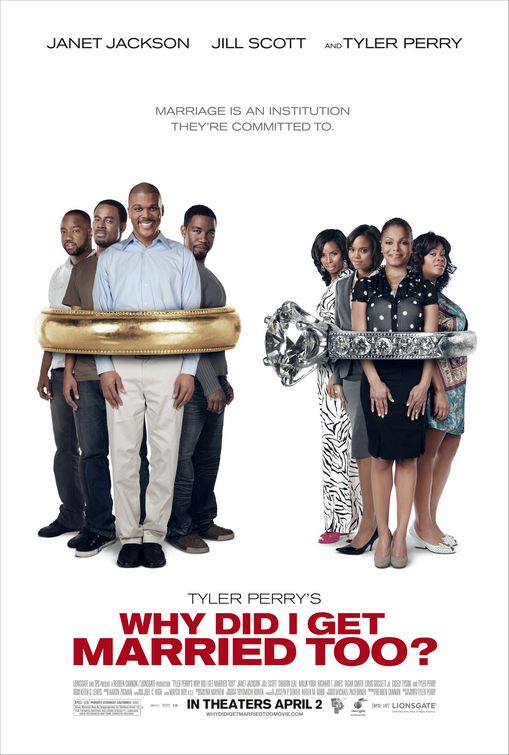 After viewing the newly released Why Did I Get Married Too?, I’m asking myself why I chose to see another Tyler Perry film.

If you’ve seen one Tyler Perry movie, you’ve pretty much seen them all, so I’ll just summarize how they go.

Plot A: A slightly dense-but-desperate black woman is wronged by her professional, white-collar, well-to-do-husband. He leaves her (usually for another woman). She becomes enraged and rancorous. Then a working-class brother comes along and saves her from herself.

Plot B: An already bitter and attitudinal black woman has to be taught how to love by a simple and kind working-class black man.

Plot C: A professional and successful black woman has to learn to overcome her frigidity so her working-class love interest can save her from a life of loneliness.

Perry’s much-celebrated working-class savior rarely sins. He’s resurrected over and over as the man all women need. I have no problem with Perry’s emphasis on class. It mirrors real life–except when the class difference is used to disparage women’s choices. When uppity women marry for money or when they’re too proud of their status, they can expect to be betrayed in a Perry film, but when they marry a hard-working brother for love he will take care of them for the rest of their lives.

It’s a slippery slope. Tyler Perry’s films don’t shift away from the cultural ideal of men as providers. Their more insidious message is that when women get greedy or choose men who can provide much more than they need, they deserve what they get.

I’m generally not a fan of these plot lines, so why would I set myself to see more of the same?

I cringe when I see beautiful, talented black women actresses reduced to screaming banshees, yet I admire the way those characters express themselves. It’s something I’ve always wanted to do. I don’t know how many opportunities for me to say how I really feel have passed me by. I don’t want to embarrass my man in public or be heard nagging from miles away, but it would be nice to know that it’s okay to say whatever it is I’m thinking—especially if it isn’t particularly nice.

I want to be one of those women who go for the gusto and isn’t afraid to express herself. But I’m caught up in all kinds of gendered socialization that says women should be seen and not heard, women are responsible for others’ emotional well-being and black women should never be angry (especially in public). So I go see Tyler Perry movies. I’m glad I’m not that woman on the big screen, and at the same time I wish I were more like her.

I watch because as a black woman I’m trying to find that flexible space for femininity that isn’t suffocated by the expectations of others. I don’t want to keep holding my tongue, but I also don’t want to be known for always giving the tongue-lashings. I watch Tyler Perry because he forces me to ask the really important question: What kind of woman do I want to be?