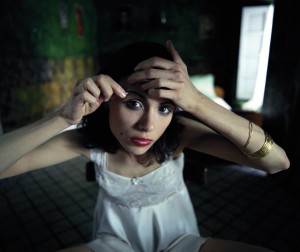 Women Without Men, a novella by Shahrnush Parsipur, was condemned to oblivion by  Iranian authorities soon after it was published in 1988. But 22 years later, Women without Men lives on, and recently has been innovatively adapted into a film by well-known visual artist Shirin Neshat. The film will open in New York on May 14th.

When the short book came out, Iran’s Ministry of Guidance ordered it banned as “corrupting” for the nation’s youth. The official government newspaper, Keyhan, wrote that the author should be punished for writing against “Islamic morals”. Like Parsipur’s other novels, including The Dog and the Long Winter and Touba and the Meaning of the Night, the book was quickly gathered from stores and the press was forbidden to mention it.

Now, in Neshat’s ingenious adaptation, which captures the magical realism of the book with beautiful cinematography, Parsipur’s work is brought back to life. Set around the time of the coup against Mosaddeq in 1950s Iran, the film follows the story of four women (there were five in the book)–Munes, Faezeh, Zarin Kolah and Farokh-Lagha–whose lives are greatly restricted by men. Theirs is a patriarchal society grappling with a tormented history of intervention by foreign powers. The women in the film have dreams–personal and national dreams–but both are forbidden by societal norms and strict gender roles.

Munes wants to be knowledgeable about social and sexual matters (in the film she wants to be a political activist); Faezeh is a traditional Muslim woman who wants a good marriage; Zarin Kolah is a prostitute dreaming of a better future, and Farok-Lagha is a wealthy woman determined to become an influential figure on the political scene. All four end up in a house with a garden in a Tehran suburb, striving for a future that was not granted to them. Gardens are popular in the middle East and especially in Iran, where a garden is a metaphor for paradise.

When I first read the book in Iran during the tumultuous year of 1988, when thousands of political prisoners being held in Evin prison were executed, I thought the women with aborted dreams reflected contemporary Iranian society. More than 20 years later, seeing the film on the eve of the first anniversary of the bloody suppression that followed non-violent opposition to the controversial presidential election of June 2009, I think the book (and now film) speak to today’s challenges. That’s because Parsipour and Neshat have masterfully portrayed the Achilles heel of modern Iranian society: the Woman Question.

The main theme of Women Without Men is women’s historical lack of participation in nationalist, leftist and Islamist movements–every one of which purported to move Iran toward a future free of foreign powers’ intervention that would allow women to flourish. The two goals were and are intertwined: Those movements consistently conflated Iran’s country’s independence with women’s status. Each of the ideologies prescribed a status for women that either 1) was modeled on the West, 2) was modeled on the Communist bloc, or 3) was an “indigenous” Islamist culture which could not be judged by so-called Western standards. The result has been the marginalization of women in the political and public spheres, because any agency on the part of women was–and arguably still is–interpreted by statesmen as evidence of a foreign attempt to dominate Iran.

These days, however, women’s agency in Iran is burgeoning as the society examines its theocratic government which, however paradoxically, has empowered women to demand rights with a republican spirit. As for the book’s censorship, which authorities thought would also stifle public discussion of gender inequality, the opposite has occurred. Women Without Men was read by many in 1988 and continues to be read. Shirin Neshat won Best Director at the 2009 Venice Film Festival, reviving interest in Parsipour’s book as well as public debate on gender issues. Parsipur, who now lives in Northern California and was herself imprisoned for four years in Iran, will be awarded an honorary degree by Brown University on May 30.

Once again we witness how censorship becomes self-defeating. As the famous saying goes “the only valid censorship of ideas is the right of people not to listen.”

October 2021 Reads for the Rest of Us