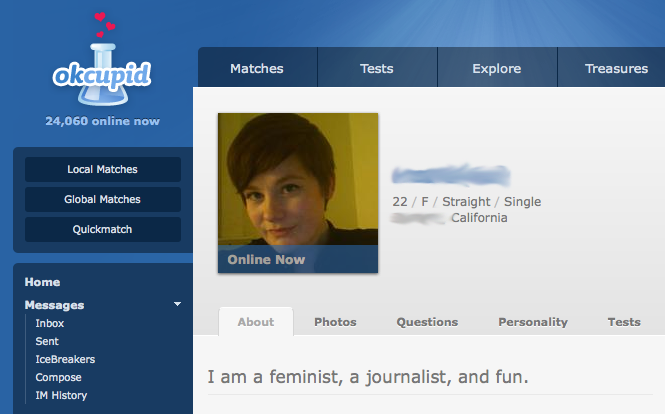 No new dates lately, but I’ve signed up for OKCupid, as per the suggestion of commenters to my previous posts. Overall, it’s a very nice site for finding feminists, since users get to answer questions like “To you, is abortion an option in case of an unwanted accidental pregnancy? Yes or No.” Helpful in sorting out the riff-raff.

In my profile, I linked to this Frisky article–“Why Women on Dating Sites Don’t Respond to Men,” which includes tips like “Your Photos Are Weird” and “We Fell Asleep Halfway Through Paragraph 4 of Your 5-Paragraph Email Essay.” I’m just trying to help you out, dudes.

However, I’ve already gotten two messages that seemed to be a little hostile to the idea of telling men how to respond to personal ads. My favorite is from a guy who first messaged me the following:

Then he messaged me a few days later, after I had linked to Frisky:

I think you just like that website killed the spirit of men! what to say,what not to say! it’s all bullshit! I understand there is immaturity! but when women say amuse or tell me something I haven’t heard!WTF ! some people say I love you and really don’t give a shit, and others truly love and bleed it! so what the fuck? yes your pics are beautiful! and I’m sure you’ve heard that but you’re still looking for the guy that truly means it! right? so don’t over look the simple guy! with simplistic meaningful expression! this concludes this announcement! lol

Oh no! I killed the spirit of men? When you message me with “You’re soo fucking dessert doll,” it sounds really sincere. I automatically assumed it came straight from the heart. The amount of messages women get on online dating sites consisting of superficial recognition of their looks is astounding. Just a tip: it usually doesn’t work.

Another message included this:

I have a bone to pick with you! … you link out to an article that is essentially the same advice you’d get from “The Game.” Yuck! How can this be? Shouldn’t we all just be ourselves in our correspondence, rather than trying to hide who we are in order to get false positive feedback? How is it helpful to massage your personality and trick somebody into dating you for a hot second, besides the physical benefit of maybe getting some action… (which puts us back in “The Game” territory… yuck).

All I’m saying is it’s nice when people put a little bit of effort into a message. Yes, I want people to be themselves. I’m just trying to encourage a little creativity. It’s not that hard to tell when someone put no effort into an attempt at conversation, and when someone actually tries. I was simply calling for less B.S. and more personal replies. And the post I linked to actually refutes the practice of “negging” promoted in “The Game.”

I also received a few messages thanking me for posting the link:

That article from frisky or something, was a good read, i give it two thumbs up.

I haven’t yet determined if the link has improved the messages I received. In my next post: OKCupid date No. 1.