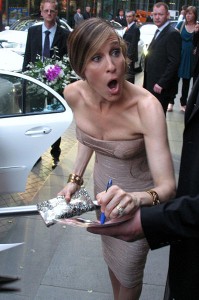 A few weeks ago, New York Times movie critic A.O. Scott recognized the new canon of Gen X midlife-crisis films, or what he should have called Gen X male midlife-crisis films. The two flicks that he said comprise that  canon are Hot Tub Time Machine and Greenberg. He judged both films on their own terms, even acknowledging the most clearly and happily low-brow of the two, Hot Tub, as an intentionally over-the-top fantasy romp. He says he related to Hot Tub so much that it was “the story of my life.”

But like other critics, his sense of humor fizzled with his scathing review last week of what I’d  (go out on a limb to) call the female counterpart to Hot Tub—Sex and the City 2, which he called “desperate, grating and a little sad.” At closer examination, both comedies have more in common as a  Gen  X midlife-crisis movie than you would think.

As with Hot Tub, SATC2 basically dramatizes the  40-something main characters facing insecurities and disappointment/boredom with their life choices (marriage, etc.), thus venturing out on a escapist trip to cope. In Hot Tub it’s to a shabby ski resort, in SATC2 to an exotic Arab land. As its 1980s young-adult icon  Hot Tub features John Cusack, while SATC2 stars Sarah Jessica Parker of Square Pegs fame (and married, coincidentally, to Ferris Bueller). In both, the characters travel back to the 1980s: SATC2 in opening flashbacks, and Hot Tub in a time-traveling fantasy. The main characters in each are self-absorbed and not always likable, but yet are relatable to Gen Xers in some basic ways. Both rely on nostalgia to create humor and draw audiences: SATC2 for fans of the TV show, which started more than a decade ago, and Hot Tub for those men harkening back to the 1980s teen sex film.

Above all, both are clearly intentionally over-the-top comedies. SATC2 recalls 1930s escapist movies from the Great Depression;  the actors of Hot Tub seem in on the absurdity of their film. Both are gleefully raunchy throughout.

He is not alone; this double standard permeates other reviews of these two movies. For example, Michael Phillips of the Chicago Tribune, who also loved Hot Tub and forgave its “derivative” nature, tore SATC2 to shreds in his review. (I wrote two years ago in another group blog about critics’ same  double standard with the first SATC film, then focusing on a bizarrely hostile New Yorker review and illustration, which was so bad that the new SATC movie actually makes a veiled reference to it.) In a commentary about the scathing reviews SATC2 has received, Manohla Dargis in The New York Times today pointed out a double standard in men and women’s “road trip” films, comparing the much warmer reception to last year’s all-male The Hangover.

I’m not saying that male critics don’t deserve to ever criticize formulaic “lady” films. And female critics have certainly been harsh on this film also. But it is finally time that critics at least try to take women’s movies like this on their own terms, knowing they’re not trying to present high art/Kurosawa-level fare, but escapist entertainment–like the boys have.

I only see this imbalance continuing, with more and more male Gen X midlife-crisis films like these coming out, such as the forthcoming Grown Ups. To counter that tide, I’d personally love to see our own most beloved 1980s female film icons summoned to action. How about Jennifer Jason Leigh of the 1982 classic Fast Times at Ridgemont High? (Actually, she’s a co-writer of Greenberg and has a minor role in it). Or what if Molly Ringwald got to blow out more than 40 candles? Any other suggestions?