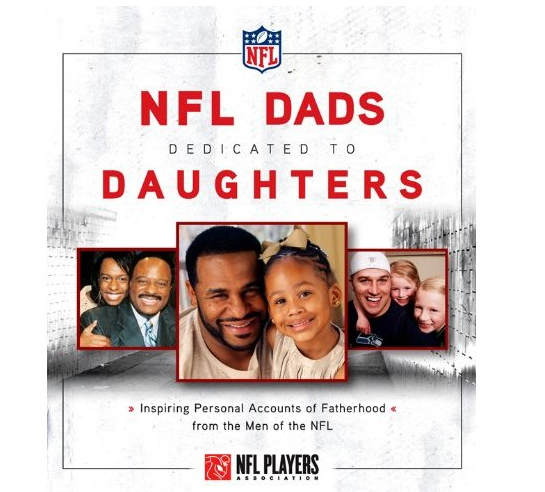 Our idea of fatherhood is in transition. The baseball-tossing dad is giving way to the diaper-changing dad; fatherhood is coming to connote caretaking, not just disciplining. The signs are everywhere, if you know where to look—from birth classes for expectant fathers to stay-at-home dads raising their children–and recently, in several photo exhibits and books.

Take NFL Dads Dedicated to Daughters, a new book celebrating the bond between pro football fathers and their daughters that grew out of a project initiated by the New York-based antiviolence organization, A Call to Men. It’s a rich, heartwarming mosaic of present and former members of the National Football League, all portrayed as loving dads—none are shown, say, trying to sack Tom Brady.

The portraits of the 60 players and their daughters suggest a different vision of manhood than we normally think of when we see professional football players. They evoke not tough, stoic, silent dudes so much as tender, loving, gentle men. Torry Holt, a wide receiver for the Jacksonville Jaguars, says, “My daughters have brought out a softer, more sensitive side of me.” If a pro football player can say that, what about other fathers? Can more dads proudly step into our identities as nurturers rather than disciplinarians?

On Father’s Day two years ago today, Barack Obama reminded fathers that a man’s responsibility to his children does not end at conception. “What makes you a man is not the ability to have a child—it’s the courage to raise one,” he said.

He also advised fathers to pass along to their children the value of practicing compassion.

Not sympathy, but empathy … the ability to stand in somebody else’s shoes; to look at the world through their eyes. There’s a culture in our society that says remembering these obligations is somehow soft—that we can’t show weakness, and so therefore we can’t show kindness…We need to show our kids that you’re not strong by putting other people down—you’re strong by lifting them up. That’s our responsibility as fathers…

Indeed, empathy and kindness are the themes of two photo exhibits featuring fathers and their children that opened this month in Michigan and Vermont, organized by men working to prevent violence, particularly violence against women.

At Allegiance Health’s hospital in Jackson, Michigan–where all babies in the county are born–an exhibit of moving images of fathers and children organized by the Real MEN’s Project (Men Embracing Non-violence) opened the week leading up to Father’s Day. A similar exhibit in support of healthy relationships and healthy parenting, organized by Vermont’s White Ribbon antiviolence campaign, is on display in Montpelier and Barre, with select photos scheduled to be published Sunday in the Times-Argus newspaper.

What’s notable about these projects is their twin aims: urging men to challenge violence against women and celebrating involved fathering.

We cannot…support a man who needs to dominate a woman in order to boost his own confidence and feel like a man. There are legal consequences for violent actions, but there should be social ramifications…as well.

At the Michigan exhibit beneath each portrait is a pledge signed by the father in the photo, bearing these words:

I will not commit, condone, or be silent about domestic or sexual violence. I will teach my children and model healthy, nonviolent relationships. I will use my words and my actions to convey to all boys and all men in my life: Real men don’t hit. Real men don’t rape.

According to exhibit organizer and father of four Dani Meier, all new parents at the hospital hosting the display will receive Tips for Dads packets among materials given new parents. “We don’t require licenses for parenting as we do for driving,” Meier observes, “[b]ut we can give new dads basic tips on teaching peaceful, non-violent kids—boys who don’t hit, and girls who learn not to expect hitting as “normal..”

Those tips, more than neckties and barbeques, are what we can celebrate with Dad on Father’s Day, as new visions of fatherhood come more sharply into focus. 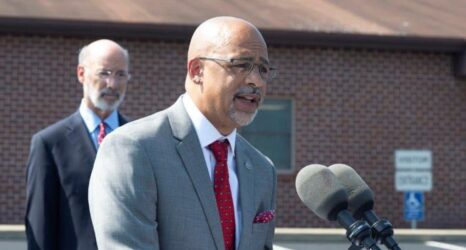 The Pioneering Black Sci-Fi Writer Behind the Original Wakanda
Where Are the Voices of Indigenous Peoples in the Thanksgiving Story?
Making Sense of the Latino Vote: The Ms. Q&A With Voto Latino’s María Teresa Kumar