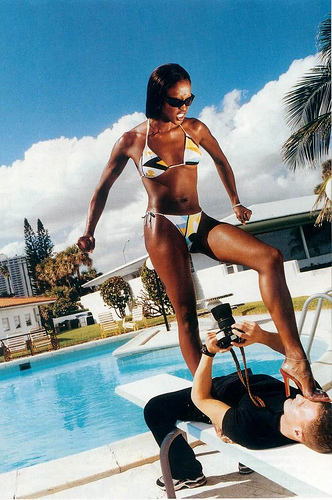 British supermodel Naomi Campbell has been called to testify in the trial of former Liberian president Charles Ghankay Taylor at The Hague in the Netherlands.

Taylor faces 11 charges of crimes against humanity during Sierra Leone’s civil war, three of which relate to sexual violence. According to Time, prosecutors believe Taylor aided rebels in many killings and plunderings by “arming, training and controlling Sierra Leone’s Revolutionary United Front (RUF) rebels … [in]  Sierra Leone so he could strip it of its vast mineral wealth, in particular its diamonds.” The charges, according to Time:

” … relate to the murder, rape, sexual slavery and mutilation of civilians by rebels in neighboring Sierra Leone–or, as the prosecution put it, [Taylor is] charged with being “everything from terrorist to rapist.”

Campbell may hold one key to putting Taylor behind bars: an uncut diamond supposedly given to her by Taylor would help prosecutors prove Taylor’s involvement in the war crimes. For a year, Campbell avoided prosecutors and refused to return calls regarding Taylor’s alleged gift, but on June 29 she was finally subpoenaed. She’s scheduled to appear on the stand July 29, and if she doesn’t comply she could serve up to seven years in jail for withholding evidence.

Campbell has been granted a powerful opportunity to help convict Taylor, who condoned a horrific regime that plundered villages, raped women and stole children, who were then beaten, brainwashed, lied to about their families and made to work in diamond mines under terrible conditions. The countless lives lost due to the perilous mining industry in the region gives  “conflict diamonds” their other nickname: “blood diamonds.”

Feminists wonder how Campbell will testify. On the one hand, she’s earned some progressive and feminist credentials by appearing at the Cinema Against AIDs Gala and, since the launch of her Fashion for Relief Haiti Charity, walking many runways to raise money for women and children’s healthcare. In 2009 she also served as Global Ambassador to the White Ribbon Alliance, which advocates improved maternal healthcare.

On the other hand, she continues to perpetuate harmful stereotypes of women. In Campbell’s “Wild Things” photo spread in the September 2009 issue of Harper’s Bazaar, she straddles a croc, jumps rope with monkeys and—clad in a cheetah-print leotard—runs alongside a cheetah (thank you, Photoshop). Her poses depict Black women as “wild” and savage creatures with untamed sexualities. Though she’s spoken out against racism in the modeling industry, she perpetuates problematic images–such as that of her mounting a giant chocolate bunny in Playboy while wearing a revealing lizard-skinned suit and stilettos. As Janet Momo of The Chronicle writes, “Who is the real ‘chocolate jungle-bunny?'”

Her alleged violent assaults against her maid and drivers have given her the reputation of being an overly entitled diva with uncontrolled rage, but unfortunately such violence is seen as funny rather than serious–as when Jezebel compared her to Miss Piggy:

Piggy’s cute, for a pig, and more importantly, she’s ultra-feminine. For her to attack someone is supposed to be funny because ladies don’t hit people—especially not ladies who wear pearls. And when they do, it’s not real violence … men and boys aren’t supposed to feel pain–at least not if it’s inflicted by women. It’s no surprise that Campbell’s latest victim, 27-year-old driver Miodrag Mejdina, isn’t pressing charges.

Naomi’s subpoena now gives her the perfect chance to take a step on the right foot–or at least get down from that looming chocolate bunny. The opportunity to send the world a message about the harmful effects of the blood diamond industry has fallen at her stilleto-clad feet. All she has to do is testify.