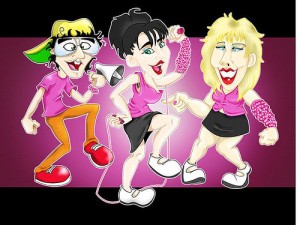 When I was 17, feminist punk electro band Le Tigre came to play in my hometown in Sweden. Coincidentally my school was holding an athletic-theme day where you were supposed to engage in a sport of your choice. My friends and I told our teachers we were going running in the park, but in reality we planned an all-day picnic in preparation for the upcoming Le Tigre show. When we passed the venue where the group was going to play, we saw their parked tour bus and knocked on the door to ask the driver if they really were there. He confirmed, but said they were sleeping and that we should come back in a couple of hours.

Two excited hours later we returned to the parking lot, and I still remember choking at the sight of Kathleen Hannah sitting casually on a ledge reading a book. It was really her! As we got closer she greeted us, and she was exactly as friendly and down-to-earth as I had imagined she would be. We told her that they had to play the song “Deceptacon” that night, and when they did it as an encore our 17-year-old hearts jumped for joy because we were convinced it was due to our request. (In retrospect, I think that the hit was a standard on their play list.)

Le Tigre is the band that most influenced my feminist coming of age. No other artists in my world managed to combine such sharp political lyrics with such catchy electrobeats. I felt comforted by “Keep on Living“, the uplifting song the band wrote as an answer to tons of fan letters from oppressed queer teens. I could let out suppressed anger when screaming along to “Seconds”,”Shred A” or their cover version of the Pointer Sisters’ hit of the 1980s, “I’m So Excited“.

While Le Tigre was a big part of my late teens, they’ve been replaced on my playlist by other artists–but they have always figured in the back of my head as the catalyst and prototype of everything I like. So when I heard that a Le Tigre: On Tour documentary had been made and would be shown at the LGBT film festival NewFest in New York City, I decided to check it out for old times sake. But I hadn’t imagined the strong emotional impact it had on me.

Shot by video-maker Carmine Covelli during the 2004-2005 Le Tigre world tour, director Kerthy Fix has taken performance and backstage footage and turned it into an intimate and engaging portrayal of an iconic band. For hardcore fans as myself, it’s a treat to see the live footage with the band dancing their choreographed dances dressed in amazing stage clothes (the dresses with “Stop Bush” printed all over them is a personal favorite). But it is the backstage material–such as a dance party on the tour bus or a bizarre night out in New Zealand where Johanna Fateman gets pursued by a man who kills sharks–that provides the strong characterizations that make the movie so enjoyable.

When the band members talk about their perceptions of being in the group and their own relationship to the feminist movement, it brings an analytical element to the story. It’s especially heartwarming to hear JD Samson–known for her masculinized, mustached look–reflect on her fears before joining the band of how her gender identity would be perceived. “Instead it turned into something really beautiful, where I feel people opened their eyes to a female masculinity rarely seen anywhere else” she says. “JD kinda became the Justin Timberlake of the band” adds Fateman as footage of JD receiving champagne and flowers from secret admirers is shown in the background.

Le Tigre: On Tour leaves you charged with the energy of the Riot Grrrl movement and the urge to go out and create something exhilarating that builds on their legacy. Check in on the band’s website, for updates on more Le Tigre: On Tour festival screenings, and on the blog for updates on future DVD releases. The trio’s latest release is a collaboration with Christina Aguilera on the song “My Girls”.

Le Tigre: On tour screens tonite at the Ford Amphitheatre in Los Angeles as part of Outfest.