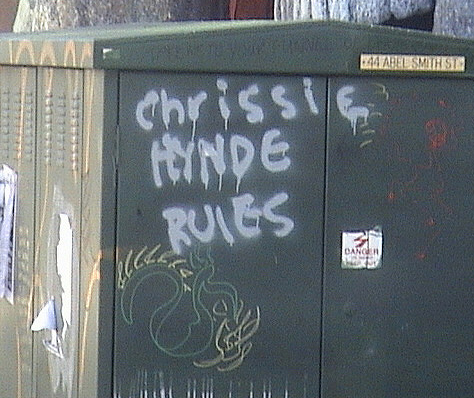 A 50-something rock n’ roller with a 20-something girlfriend hanging off his arm: You know the scene, it’s as old as Keith Richards. But what if we invert it? How about a 50-something rock n’ roller with a 20-something boyfriend hanging off her arm? Cue Chrissie Hynde. In her first full album without the Pretenders, the band she’s fronted for the last 32 years, Hynde has partnered with Welsh singer and songwriter JP Jones for Fidelity! Though the album is credited to JP, Chrissie & the Fairground Boys, fans of the Pretenders will recognize the rousing rock that’s their signature sound. Lyrically, the album documents the relationship between Hynde, the 58-year-old Rock & Roll Hall of Fame member, and Jones who is in his 20s.

For a woman who once scoffed at American country music, the singles available off Fidelity! riff with the melodious sounds of steel guitars and pay homage to the alt-country movement of the 1990s. Though Hynde explored the sounds of country with the Pretenders in their 2008 CD, Break Up the Concrete, the pared-down acoustic version of “Perfect Lover” (available on their MySpace page) is even more heavily invested in the chords of country. One can assume that in part this sound is motivated by Jones, whose gravely, sandpaper voice harmonizes well with Hynde’s melodiousness; he’s a little bit country, she’s a little bit rock n’ roll.  The lyrical exchange and verse trading between the duo is heightened by the contrast of their voices; it just works.

What also works? That Hynde is telling a narrative we haven’t heard in rock and roll. “For me, it’s always been clear that music is a vehicle to encourage self discovery,” she said on their MySpace page, “So we’ve been truthful on this album. We’ve proven that two people can love each other, override their base desires and distill the love into something musical, something elevated, something rock and roll.”

Far from the archetypal growl of the cougar, Hynde’s lyrics are filled with guilt for her attraction to the much-younger Jones. Hynde and Jones’ lyrics eschew the image of an older over-sexed woman and instead delve into the cultural realities of an older woman and younger man. In “Perfect Lover,” Hynde sings:

Hynde tears apart the “cougar” stereotype with raw and brave lyrics that have typified her career as the rare woman bandleader. But that’s why Hynde is such a rebel even within the rebel-filled population of rock’s world: She brings a woman’s perspective to a heavily male-dominated industry. In doing so, she disassembles the stereotype of the hot-blooded-easily-available woman so typically found in the music and instead captures something much closer to the realities of women’s sexuality. “It wasn’t an easy album to make emotionally,” Hynde wrote, “but writing and singing together was like falling off a log–the music was pouring out of us. We wrote to each other, about each other, with each other and for each other.”

It’s not just the riffs of her electric Telecaster guitar that make Chrissie Hynde an iconic rocker, it’s her feminism as well.

JP, Chrissie & the Fairground boys will release Fidelity! on August 24, 2010.