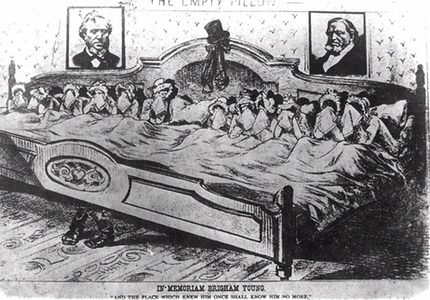 While it comes as no surprise that the Utah Supreme Court has overturned the convictions against polygamist Warren Jeffs today, the outrage is no less palpable for feminists watching around the world.

Jeffs, the so-called prophet of the Fundamentalist Church of Jesus Christ of Latter-day Saints (FLDS), was convicted as an accomplice to rape in 2007 because he forced a 14-year-old girl, Elissa Wall, to marry her 19-year-old cousin.

What Wall endured is not uncommon in Utah and 32 other states where Mormon and Christian fundamentalist polygamy thrive. FLDS communities, under Jeffs’ direction, can be found in Utah, Arizona, Colorado, South Dakota, Idaho, Texas, Canada and Mexico. The trafficking and forced marriages of underaged girls to men–usually much older and often a relative–occur with regularity in this belief system.

The Utah court’s decision, which they said was because of an error in the original judge’s jury instructions, is not a surprise because the mostly-Mormon justices come from a background of acceptance and belief in polygamy themselves. Though Mormons disavowed the practice in favor of statehood in the 1800s, the law of “patriarchal marriage” is still in Mormon scripture. Getting a conviction for this illegal behavior is rare in Utah, and when legal punishment occurs it is barely a slight tap on the wrist. The cozy relationship between the Church and the Utah legal system is one Utah Sen. Orrin Hatch should be taken to task for.

Assistant Utah Attorney General Laura Dupaix told KSTU in Salt Lake City that the opinion is “…going to make it difficult, I think, for us to do future prosecutions in cases where some of these men in positions of power–almost complete power, like Warren Jeffs … forc[e] young girls into these marriages. I think that’s really the part of this opinion that is most disappointing for us.”

Feminists are used to disappointment. But disappointment lasts only until we rise up and make change. The institutionalized trafficking and forced marriages of thousands of girls in polygamy is a change waiting to happen.

Andrea Moore-Emmett is the author of God's Brothel, The Extortion of Sex For Salvation in Contemporary Mormon and Christian Fundamentalist Polygamy and the Stories of 18 Women Who Escaped. She is the author of several articles covering polygamy for various national magazines and was the researcher for the A&E documentary, Inside Polygamy, which also aired on the BBC. As a journalist, she has been the recipient of five awards from the Society of Professional Journalists, Utah Headliners Chapter, including the Don Baker investigative Journalism Award. She was awarded a Women in Communications Leading Changes Award and an Award for Distinguished Service and Excellence in Journalism from the Leadership Council on Abuse and Interpersonal Violence and the Institute on Violence, Abuse and Trauma. Moore-Emmett served as Utah NOW President and on a Salt Lake City Mayor's Commission. She is currently living in California where she is finishing a Masters degree in psychology.