Justice for Karachi Gang-Rape Survivor: You Can Help! - Ms. Magazine
Skip to content 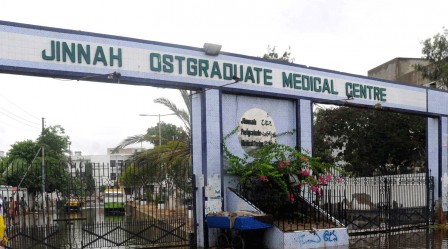 Jinnah Postgraduate Medical Centre is a teeming hospital in the middle of Karachi, Pakistan, a city of nearly 19 million people. In early July, it was the scene of a brutal gang rape.

One of the country’s largest state-run medical institutions, the center houses hundreds of patients, doctors, nurses and other medical personnel. Rampant neglect and a severe lack of resources mean that patients and their families routinely camp out in the halls of overcrowded wards and on hospital grounds, waiting for treatment. Cats roam among hospital beds and forage among medical waste. Amid repeated power outages and flooding due to torrential downpours, hundreds of trainee doctors and nurses tend to the never-ending stream of Karachi’s ailing. Political parties vie for control of the hospital facility, and political affiliations often determine who gets jobs, promotions and even treatment.

It is in this fraught atmosphere of political intrigue and crushing human need that Magdalene Ashraf worked as a nurse trainee. A member of the Catholic religious minority in Pakistan, 23-year-old Ashraf was receiving nursing training with the hope of obtaining a permanent job. She was on duty July 13 when a fellow nursing student, Sajida Fatima, approached her with a lead on a job. According to a statement given by Ashraf to the police, Fatima asked her to accompany her to Mess 96, a housing area for doctors, under the pretext of meeting two doctors who could help her with her career. It was outside this apartment complex that Ashraf was found hours later, lying face down and bleeding, her clothes torn and her body bruised.

She was treated for subdural hemorrhage–bleeding under the skull–and remained unconscious for two days. When she finally regained consciousness and was able to give a statement, she described the events leading up to her gang rape. When she and her friend reached the apartment, Dr. Abdul Jabbar Memon, a medical legal officer at the hospital, was present along with the two other doctors. Ashraf’s friend soon disappeared, leaving her with the three doctors, who then proceeded to brutally rape her. Witnesses reported seeing her being tossed from the balcony apartment onto the street.

The aftermath of Ashraf’s harrowing ordeal has been shocking. First, even as fellow trainee nurses protested against the rape and harassment of nurse trainees by doctors, the police made few efforts to register a report, begin an investigation or apprehend two of the accused men who had fled the scene. The room where the rape took place was not sealed as a crime scene for days. Jabar, the chief culprit, was arrested, but rape charges weren’t added to the police report until after the media began reporting on the case.

Ashraf’s medical report shows that she was raped, but Jabbar is only being held in custody until tomorrow, July 31–even though the Pakistan Criminal Code lists rape as a non-bailable offense. Even more alarming, the two other suspects remain at large over a week since the incident took place.

Ashraf’s case highlights the hapless situation of someone who belongs to two of the most downtrodden groups in Pakistan: women and religious minorities. According to demographic information on her medical report, Ashraf lives in an impoverished area of Karachi, home to many of the city’s Catholics. The opportunity to get a permanent job undoubtedly presented a means to elevate herself and her family out of poverty.

The accused rapist, who was living in the doctor’s mess illegally because he had been transferred to another hospital, was powerful within the medical center’s establishment and has contacts in the city’s police department.The power divide between nurse trainees and medical legal officers is so great that many nurse trainees who chose to protest against the rape felt threatened about returning to work.

Rape has always been a taboo issue in Pakistan, and Ashraf’s case is no different, with many rushing to attack her credibility and using the fact that she worked in a male-dominated environment to question her morals. In its depravity, her case is a grotesque illustration of the complete absence of physical security for Pakistani women in the labor force who do not have power or connections–a problem exacerbated for Christians. Indeed, days after the rape, two Christian brothers accused of blasphemy were gunned down in broad daylight while being taken to court. In Ashraf’s case, fellow nurse trainees who are witnesses in the case have reported receiving death threats. Ashraf herself, severely threatened by the supporters of her accused rapists, has not been provided security by the police. Sent home from the hospital, she remains vulnerable to harassment from the accused. Her lawyer has withdrawn from the case and she’s currently without legal representation, since Pakistani law does not provide for automatic prosecution of rape cases.

The plight of Magdalene Ashraf in Karachi may seem remote and abstract, but her case is one in which the international community–and especially those committed to justice and empowerment for women–can truly make a difference.

ABOVE: Jinnah Postgraduate Medical Centre where Ashraf was working.