Ms. Gets Down and (Roller) Derby With LA Dolls - Ms. Magazine
Skip to content 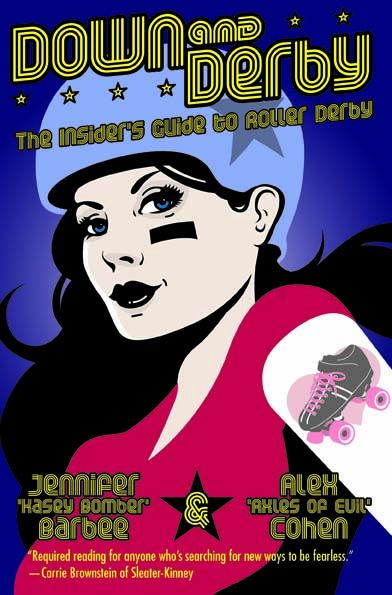 Down and Derby: The Insider’s Guide to Roller Derby got here just in time. The latest revival of the sport has sparked national interest, and it’s even spreading to the Midwest. Need proof? The Sandusky Roller Girls are gearing up for their first bout.

The Ohio town sits on the coast of Lake Erie, but less than a decade ago, roller derby resided exclusively in larger cities like Los Angeles. Authors Kasey Bomber (Jennifer Barbee) and Axles of Evil (Alex Cohen) are, in fact, members of the L.A. Derby Dolls, a bank-track league in California. Several Dolls can be spotted in The Datsun’s music video for “Girl’s Best Friend,” as well as the movie Whip It. In fact, showing Drew Barrymore and Juliette Lewis how to get down and derby is what motivated Kasey and Axles to write the book, which will crash into bookstores Tues., August 3.

Like Maggie Mayhem’s (Kristin Wiig) words to Babe Ruthless (Ellen Page) in Whip It, “Why don’t you put some skates on–be your own hero,” each page reads like an invitation to the coolest club you ever wanted to join. I had a chance to meet Kasey (on left in photo below) and Axles (on the right) at a book signing earlier this week. Later, we spoke on the phone and I finally got to ask all my burning questions. 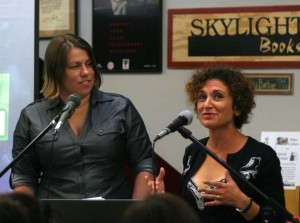 Ms. Blog/Kate Noftsinger: At the book-signing you said this was a way to profess your love for derby. But why now?

Axles: Coming out of [Whip It] we realized we really do know quite a bit. Our jobs were to be derby consultants and derby teachers. We had so much fun working on the movie and looking at derby in this creative, cinematic way that we thought it’s really time that we just do this book that we’ve often talked about doing.

Kasey: It seemed like there needed to be a little bit more than just this oral history telephone game about how the modern derby started out. We wanted to get that down on paper so people would get the credit they deserved for being the pioneers of this modern version of the sport.

Ms.: And it started as an “idiot’s guide” but turned into something different.  How would you describe it?

Axles: It really is a celebration book. It’s kind of like a movie, where at the beginning you see a little snippet of something and then you go back and figure out where it all came from. [We] give a detailed history of the sport, starting in the 19th century all the way up through this modern-day version. Then we look at all different aspects of derby: the rules, what it takes to become a derby girl, the culture of it …

Kasey: It was our hope that this could be the first and last book that anybody ever needs to answer any questions.

Ms. You trace roller derby all the way from the very beginning.  When was that?

Kasey: Marathon races, the seed of roller derby, were going on as early as the mid 1800’s. So the big difference that Leo Seltzer brought in with the marathon races in the 1930s was that he added women. Which was obviously very significant. From there, early derby in the 1940s, 1950s, was very big and television was just starting up. It became popular for television programmers who didn’t have a lot of stuff to put on TV… and as a result, people got tired of watching roller derby. It had a big revival when Leo Seltzer’s son Jerry took it over and brought it out to the West Coast and that’s what a lot of people remember: the Bay Bombers, Ann Cavello and Joanie Weston, big names at the time. That was its huge heyday.

And then it started again in the 1980s with some really horrible spandex costumes. They thought that they would make it extreme by putting a pit of live alligators in the center of the track. Nothing says roller derby like a nice round of ‘gator-wrasslin.’ [Rock-n-Rollergames] lasted for about a season. It pretty much looked like American Gladiators on wheels. And then when rollerblades became popular, they started up Roller Jam, which was based out of Florida. It all pretty much died out by the end of the 90s until these girls in Texas in 2001 started up roller derby as we know it now.

Ms. Why do rollerblades suck?

Axles: They don’t suck.  I think it just has a lot do with the nostalgia.  A lot of the women who do derby today grew up with rollerskates. And I think a lot of it is aesthetics, too. There’s something really sexy about the way that women look when they’re wearing quad skates.

Kasey: Another thing is a lot of those girls in Texas who started this modern derby, a bunch them were involved with the skating community. [Skateboarding] has long had a grudge with the rollerbladers.

Ms.: Speaking of grudges, which is harder–flat track or bank track?

Kasey: We both come from a bank-track background of skating and there’s a long debate. But the truth is both of them are extremely difficult for completely different reasons. Flat track, you’re working against the force of gravity. [Bank track] works with gravity and your momentum, so you shoot out of those turns like it’s a cannon.

Axles: Right, and if you’re doing bank track, you could fly over the railing and potentially break your neck.

Kasey: Flat track is responsible for making derby so widespread now because of the ease of operation; all you really need is a role of tape to tape off a track and a space big enough and flat enough to do it.

Ms.: Derby girls are always depicted as combative, but isn’t there a sense of community too?

Axles: We’re able to co-exist really well because we [all] have this sport that we really really care about and we know how important it is to all of us.

Ms. And what about the parties?

Kasey: We earn it, because there’s a lot of work that goes into playing the sport.  The reputation roller derby girls get for rolling hard into an afterparty and leaving everybody with their jaw on the ground [stems from] a lot of adrenaline that happens when we skate. We work really hard to get there.

Axles: I’m not a professional athlete. I’ve always really enjoyed doing derby as something that was different from that. No, I don’t get paid for it, and that’s fine. Yes, I put in a lot of money and I could get potentially hurt, but then being able to party as hard as I want after a bout becomes like a certain entitlement.

Ms.: And certain traditions are part of that subculture. Kasey, didn’t you start derby wives?

Kasey: [About teammate, friend and derby wife “Evil E”] We were on this road trip and just kinda had this moment. “I love you, man. You’re like my wife.” And this buddy system that we developed–everybody really took to this in a way that is inconceivable to me.

Axles: For the first RollerCon [a Las Vegas convention for roller derby] this term of “derby wife” had become prevalent in leagues throughout the country, and one day I remember distinctly being like, “Well, we’re in Vegas. That’s where people get married.”

Kasey: This has been a five-year tradition. It’s really nice to see that it means something for so many people.

Ms.: Do women like roller derby because they finally get to be aggressive?

Axles: I think women have always had that raw power and ability to be really tough, it’s just that there aren’t that many opportunities to do it.

Kasey:  They realize that there are other areas in their lives where maybe they could be a little more aggressive. I mean, it’s definitely helped me to advance professionally, and has just given me so much outside of what I get when I wear skates.

Ms.: What’s that one thing that gets skaters hooked on derby?

Axles: It’s the skating. It’s great to be in front of a crowd of thousands of people who are cheering you on, and it’s fun to have the make-up and the outfits and all the rest of that.

Kasey: As much as we love to talk about the community, it is a sport, and it is ultimately about the skating. Otherwise we would join a knitting circle.

Footnote from Ms.: Beware–those who enter a relationship with roller derby quickly find themselves head over heels. Read the book, lace up your quads: Your local league is waiting.