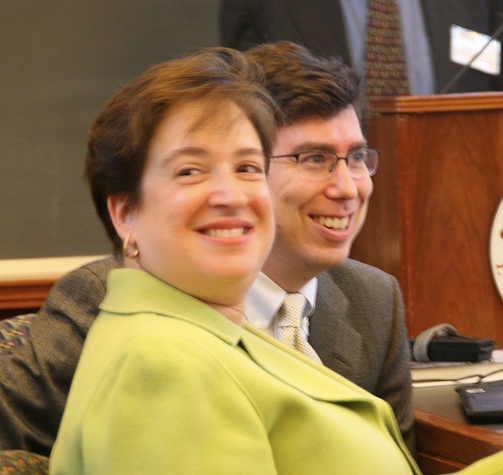 Ms. has been following Kagan’s path to the court closely. Justine Andronici outlined in May why we need women justices:

As Obama and subsequent presidents continue to make selections … we can only hope that they will do so with a conscious focus on gender equality on the bench.  If they do, then a critical mass of women will eventually develop, and women will take their rightful place as equal partners with men on the highest court in the nation..”

The biggest criticism directed at Kagan was her lack of experience as a judge. Andronici begged to differ:

If the right wants to talk about experience, let’s talk about what Kagan brings to the Court in terms of life experience. In an unequal society, where women still earn 78 cents on the dollar (and that’s a generous figure) and are fighting tooth and nail to maintain their reproductive rights, Kagan brings a perspective grossly unrepresented on the Court: the profound experience of being female in our unequal social, economic and political climate. Her experience as a woman, which she will share with only two other Justices, is critical to the Court’s ability to respond to and protect the rights of more than 50 percent of the population.

Stassa Edwards wrote in June about the bias Kagan faced during confirmation hearings, saying, “Elena Kagan’s grilling, like that of Sonia Sotomayor’s, was a stark reminder of how embedded sexism is in our political rhetoric.” Kagan has been mocked by conservatives for both her attire choices and (unknown) sexual orientation.

Hopefully, Kagan’s appointment, along with Justice Sonia Sotomayor’s, is a beginning of a more fair and representative American judiciary. One of the people excited about Kagan’s appointment is Justice Ruth Bader Ginsburg. “To me, it’s one of the most exhilarating developments,” Ginsburg told the Associated Press.