Can Rosie Get a Green-Collar Job? - Ms. Magazine
Skip to content 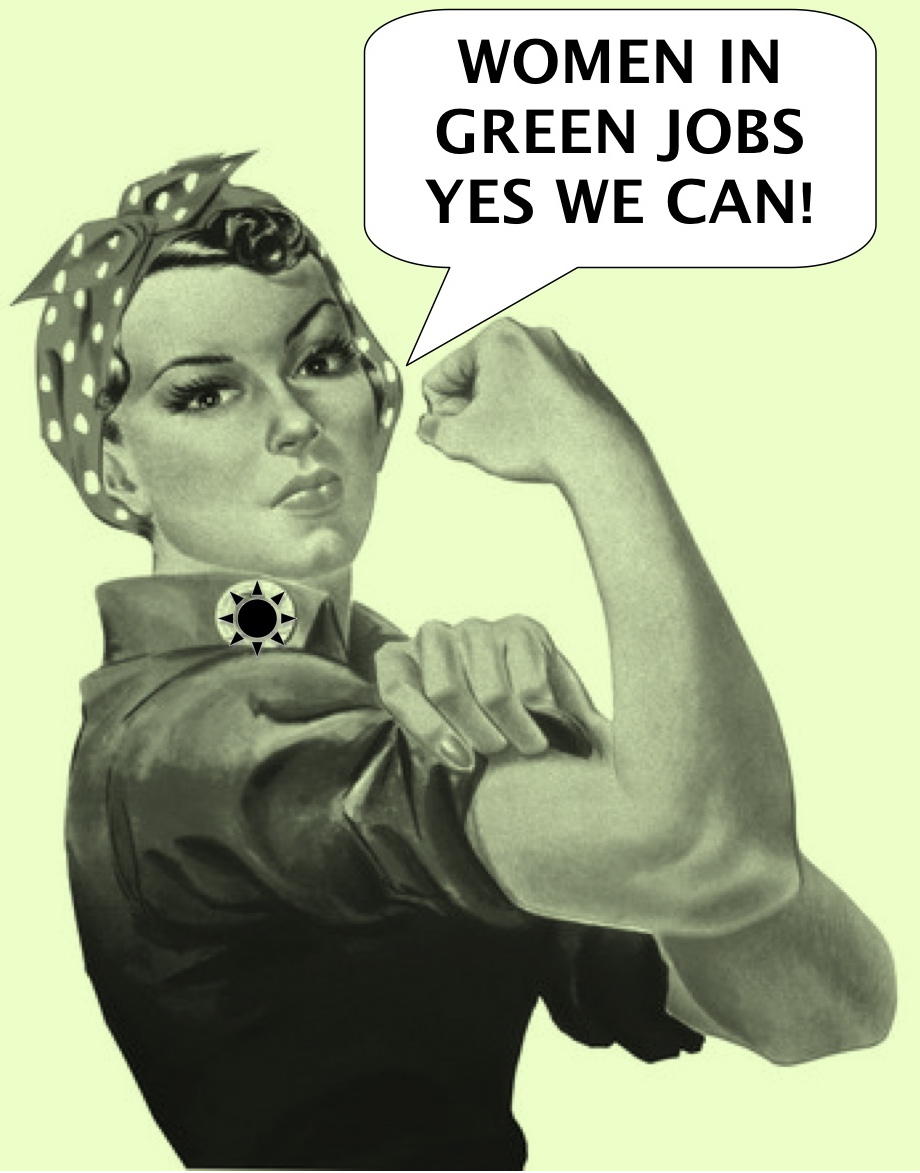 Is President Obama’s emphasis on green jobs in his stimulus legislation–$55 million in funds directed toward developing green training programs–a 21st-century version of the New Deal? If yes, is it a gender-neutral New Deal?

According to labor statistics, the answer is “no.”

It turns out that a disproportionate number of “green” jobs are in fields traditionally dominated by men, especially in the alternative energy area. A study by the United States Conference of Mayors found that half the projected new green jobs are either in engineering (12 percent women) or in the men-dominated professions of law and consulting. Most of the rest are in industries dominated by men (where women are 25 percent or less of the workforce): manufacturing, construction, agriculture and forestry. Some reports show that jobs in these fields often pay 20 to 30 percent more than jobs in traditionally women-dominated fields, and frequently have better benefits, greater career training and advancement opportunities and higher reported levels of job satisfaction.

According to the Women’s Bureau Division of the United States Department of Labor, “Green jobs are diverse, rewarding and overwhelmingly nontraditional to women.”

Green jobs could be rewarding indeed to the job-starved economic recovery. According to the National Governors Association Center for Best Practices, every state is seeing growth in at least one green industry segment–including energy conservation, waste management and clean energy. Two years ago, Jerome Ringo, president of the Apollo Alliance, predicted that the U.S. “could generate three million to five million more green jobs over the next 10 years.” Last month, Nancy Folbre, noted in The New York Times’ Economix Blog that, “green jobs are definitely on the rise in the United States.”

But while many companies are looking to develop green technologies, they are encountering a skills gap in the labor force. For example, a review of literature by the National Renewable Energy Laboratory found that the lack of a skilled and well-trained work force is a barrier to growth in the solar power sector.

Does this gap provide an opportunity for women to step in? The answer is “yes.”

Policymakers, funders, employers, workforce professionals, advocates, training and education providers are targeting efforts to ensure that women recognize and take advantage of the opportunities offered by green occupations. For example, the Austin Community College District received a grant from the U.S. Department of Labor Women’s Bureau to support their “Women In Green Jobs” recruitment campaign and new resource website.

Some women leaders in green industries are also working to create more opportunities for women to enter traditionally men-dominated sectors of the green workforce. More attention needs to be paid to trailblazers who have already shifted the paradigm in their respective industries—like Geraldine Knatz (executive director of the Port of Los Angeles), Mary D. Nichols (chair of the California Air Resources Board) and Maggie Fox (CEO of the Alliance for Climate Protection). I’m proud to say that my sister Jaime Nack is one of the women at the forefront of such efforts: Greening the 2008 Democratic National Convention and organizing the upcoming Women In Green Forum, a two-day conference that will launch this September in Pasadena, Calif.  to highlight women leaders in sustainability and provide networking opportunities for women entering green careers.

Women are driving the green movement. As the key decision makers at home, they are responsible for the rise in consumption of organic products, the banishment of toxic toys and chemicals from homes and increased adoption of everyday eco practices. Armed with a natural propensity towards sustainability, women also have a potentially huge contribution to make as business leaders in the new green economy. It’s our duty to ensure we execute on this, and encourage other women to do so too.

Women’s professional networks have been a mechanism for cultivating long-term relationships, and the hope is that a strong network of green women professionals will support women getting and keeping green-collar jobs. The range of green jobs includes occupations which have traditionally attracted women (eco fashion, interior design, natural health/beauty products, environmental media), as well as career paths which have traditionally been dominated by men (labor-intensive construction positions, green architecture, energy efficiency, clean transportation, renewable energy and urban planning).

While new events and organizations are being created to support women’s entrance into these professions, momentum must continue to build behind policies and practices that encourage girls to pursue education in science and technology and which open doors for women to pursue careers in the expanding green workforce.

Note: Visit the Women In Green Forum website for more details and to register.

Photo: Used with permission from the Austin Community College District.