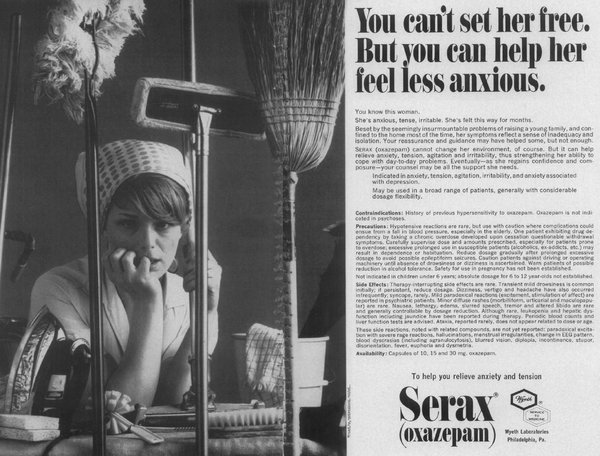 Is your patient trapped behind metaphorical bars of household cleaning equipment? Is she “anxious, tense and irritable,” “beset by the seemingly insurmountable problems of raising a young family,” and “confined to the home most of the time?” Clearly, there’s nothing you can do about her social predicament—but you can pump her full of drugs to treat her “sense of inadequacy and isolation.” Way to go, Wyeth Laboratories of Philadelphia: You successfully pathologized women’s sense of isolation when they’re confined to the home. Why try to bring about change in a society that expects women to put their own needs and desires on hold in order to be the “perfect housewife” when you can just medicate away their unhappiness?

This ad for “Serax” appeared in a 1967 medical journal and can be found in a higher resolution on the often satirical Bonkers Institute website, which seeks to expose “shameless disease mongering and unprecedented pharmaceutical profiteering.”

It’s just one example of the misguided, harmful, and often gender-biased psychiatric misdiagnosis and over-medication that arose in the 1950s and are still ongoing, with women being prescribed potentially harmful medication for “symptoms” related to everything from loneliness to menstruation (see Ms., Summer 2008) and menopause.

In a feature article in the Fall 2003 issue of Ms., Dr. Jonathan M. Metzl, author of Prozac on the Couch: Prescribing Gender in the Era of Wonder Drugs and assistant professor of psychiatry and women’s studies as well as director of the Program in Culture, Health, and Medicine at the University of Michigan, describes this gender bias in pharmaceutical ads:

Women appear in a disproportionate number of drug ads, which themselves appear disproportionately in women’s magazines. While women are diagnosed with depression and other mental illnesses two to three times as often as men, scholars have documented companies’ attempts to expand those imbalances in order to increase the market for new drugs.

Moreover, Metzl points out that:

Even into the 2000s, pharmaceutical advertisements continue to promote a message that comes right out of the 1950s: that a woman’s failure to adhere to social expectations and normative gender roles is a mental illness. … These ads have communicated not just the fact that their products help many women suffering from anxiety and depression, but also the message that women’s ambitions and social concerns can be treated, or normalized, with psychotropic medications.

In other words, by utilizing psychoanalytic and biological constructs, traditional gender roles are strengthened through the pharmaceutical industry, as women who deviate from them are medicalized. Of course, pharmaceutical ads targeting women can have many positive effects, such as encouraging women to speak to a doctor about what’s troubling them and combating the stigma of certain conditions. Many women’s lives are significantly improved when they learn about medication that can be beneficial for them. But isn’t it time we were a little more critical, looked behind the ads, and started making informed decisions about our own health?

Thanks to Miranda Spencer at Red Panda Communications for alerting us to the Bonkers Institute website!

Photo from The Bonkers Institute