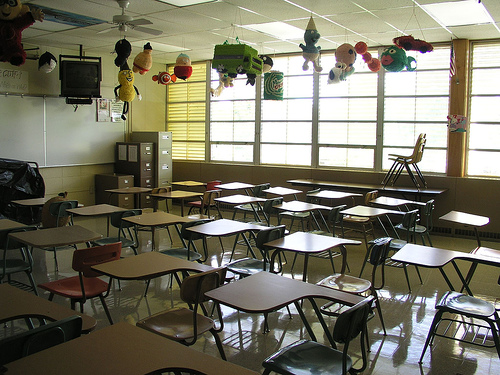 For over a decade, bell hooks has made an impact on my high school students.

I’ll never forget when Rachel, an African American former student of mine, stopped me on the streets of New York while she was a college student and said, “I started taking classes on black feminist theory because of your course.”

I’ll never forget when Sam, a white male former student, told me he brought his 14-year-old male cousin to see Judy Chicago’s “The Dinner Party” at the Brooklyn Museum. He said, “I wanted to pass on what I learned in your class.” The next day, Sam began interning at a reproductive justice organization.

I’ll never forget that Jenilssa, a Dominican former student, is now taking women’s studies classes at Cornell alongside her courses in hospitality management.

All of these students read bell hooks while they were in high school. They read chapters from a range of works such as Feminist Theory: From Margin to Center, Teaching to Transgress: Education as the Practice of Freedom, and Feminism is for Everybody. All of them have told me that, as a result of reading her work, they have gone on to college with a different mindset about race, class and gender and a different vision for their studies and beyond.

Throughout my career, students—female and male, white and of color, queer and straight—have responded beautifully to hooks’ call to become self-actualized through feminist practices. Whether it is in my memoir-writing course or my feminism class, they have discovered that they indeed want to and can change the world. They are inspired to become activists, artists and even hotel managers with a conscience. In fact, on end of semester evaluations, they consistently demand that future classes read hooks’ work.

Too often, when we think of feminist classrooms, we think of colleges and universities. But we need to shift the paradigm about how we imagine where feminist education takes place. I teach hooks to high school juniors and seniors who come from the Village and Washington Heights in Manhattan; the South Bronx; Park Slope, Brooklyn; Jamaica, Queens; Hoboken and Jersey City, N.J. Can you imagine the conversations that are happening when students from all walks of life talk about feminism in a high school classroom? It is an explosion of transgression, and indeed, an explosion of freedom. As hooks would say, it is “education as the practice of freedom.”

I am not the only one doing this work. Teachers today at all levels are bringing a feminist lens to their classrooms and students are responding in powerful ways. Students want to know that feminism is relevant to them and that it is not sitting in a box in a museum. They want to be assured that feminism is alive so that they can contribute to it and make it their own.

These transformed and transformative classrooms are a testament to hooks’ vision of changing the way we think of pedagogy as liberatory for all involved in education—from the teacher to the student to the institutions we teach and learn in everyday. As hooks has written, we are all “striving not just for knowledge in books, but knowledge about how to live in the world.”

During my first year of teaching in 1997, I read hooks’ Teaching to Transgress, which completely confirmed my desire to teach high school. Though her book was aimed at college professors, I read it with the lens of how her words could be applied to high schools, especially when she writes: “progressive, holistic education, ‘engaged pedagogy’ is more demanding than conventional critical or feminist pedagogy [because] . . . it emphasizes well-being” and a “process of self-actualization.” Indeed, I have had to do as much work on myself—such as coming out as a queer teacher of color—as my students have done on developing a critical consciousness. In order for this work to have real meaning, I need to be as true to hooks’ call for educators to be self-actualized as I want my students to be. This is the power of her work: Both teachers and students must take the risk to know themselves in order for real education to happen.

It was ultimately her work that inspired me to start my own blog, Feminist Teacher, to write about the work I do in my classroom. It is her belief in reflection and praxis, or action, that makes it possible for me to teach theory one day and then have my students act on such issues as sex trafficking the next. If it weren’t for hooks reaching in and shaking up my mind when I was 22, I don’t think I ever would have reached the point where I could shake up our young people to care about their hearts, their minds, and their world.

Ileana Jiménez is an English teacher at a New York high school, where she offers courses on feminism, LGBT literature, Toni Morrison and memoir writing. She is the founder and sole blogger at Feminist Teacher.