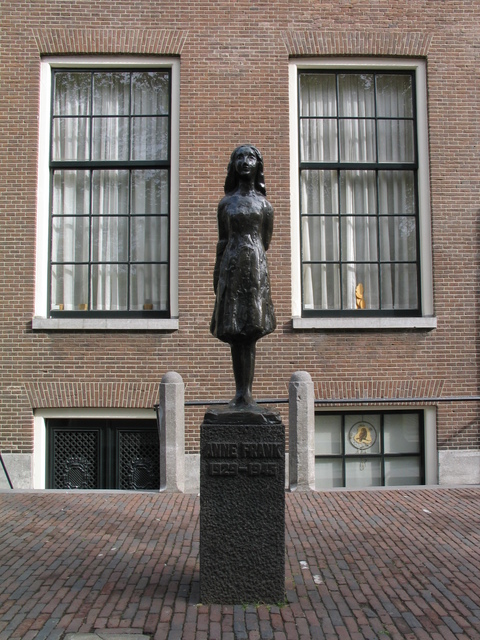 Can you believe that the story of a 15 year-old girl from World War II continues to inspire people more than 66 years after it was written? As just one example of its popularity, Anne Frank: The Diary of a Young Girl is currently sixth out of more than 430 books in Ms. magazine’s all-time Best Feminist Young Adult Books on Goodreads.

No wonder! While Anne Frank has become the icon of hope in the Holocaust,  her rich personal story is about the making of a writer, an artist and a feminist. And now there’s a new way to discover Anne other than the beloved diary or its film adaptations: the Anne Frank House Authorized Graphic Biography, written by Sid Jacobson and illustrated by Ernie Colon (published by Hill and Wang).

Gloria Steinem called Anne Frank a “true superhero of immeasurable proportions.” Eleanor Roosevelt wrote in the introduction to Anne’s dairy that it was “one of the wisest and most moving commentaries on war and its impact on human beings that I have ever read.” Whoopi Goldberg said recently at the 92 Street Y: “Anne Frank’s story brings all people together. She’s not just a little Jewish girl. She’s an oppressed girl. And that’s my own story, too.”

The Graphic Biography begins by depicting Otto and Edith Frank as loving parents to Anne and her sister. While Edith sees to  traditional tasks of mothering, Otto devotes himself to nurturing Anne and Margot’s curiosity, intellect and creativity. The graphic bio shows him gathering his daughters’ friends for storytelling, taking them to his office where Anne learns to use a typewriter, encouraging them to keep pen pals in America and inviting interesting and diverse friends to their home on Saturday afternoons for stimulating conversation. It is also Otto who steers Anne to the diary in a store window as her 13th birthday nears. He knows the family is going into hiding soon and worries about silencing his very social, physically active, youngest daughter.

The new book vividly portrays Anne’s facial expressions and body language as she grows and takes pride in her physical developments over the 25 months in hiding. Of visual interest, too, are her ongoing rebellions against her mother as a role model, and her struggle with her roommate, Mr. Pfeffer.  When he makes fun of her writing, we see Anne calmly proposing as a solution that they share one desk—he could take mornings and she afternoons. Yet, in a thought bubble above the story’s action, we see her imagining a physical fight with him. In spite of Anne’s mature efforts, Mr. Pfeffer cannot recognize Anne as his equal. With Otto’s help, she ends up with only two afternoons per week at the desk.

Even so Anne is fearless. She finds nature, love and getting her period empowering. But it is in writing that she finds the freedom to be herself, allowing for reflection and self-criticism. Her diary is an act of resistance; rather than sink into depression as others do, she lives her life fully while she can. On March 28, 1944, when the Dutch government announces that diaries will be collected after the war, Anne suddenly realizes that she has an audience. She rewrites her whole diary in a higher literary style.

“If God allows me to live, I’ll work for mankind,” Anne says to herself in a thought bubble during a scary warehouse burglary.

Anne’s final independence is won with a letter to her father stating that she takes full responsibility for developing her own character. Although she is sad to disappoint him, she doesn’t back off.  After her first treasured kiss with Peter, instead of pursuing him she redoubles her effort at writing and vows not to be an ordinary housewife. Even after the family is betrayed and sent to Westerbork, the Graphic Biography portrays Anne as gleaning strength from seeing nature through the train window.

The Graphic Biography is yet another tool, like Anne Frank’s diary, to show how a young women can take steps toward becoming independent thinkers, and how one’s actions can have an impact on the world.