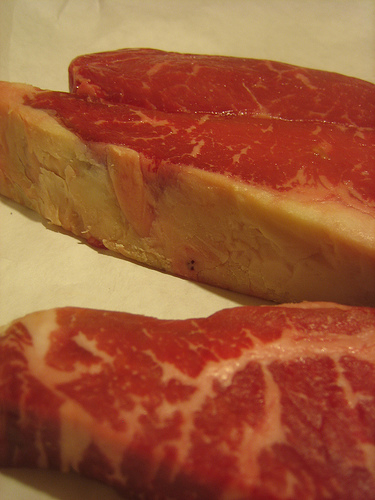 It didn’t take long for fashion and food columnists alike to churn out their reactions to what may be Lady’s Gaga most infamous fashion choice yet: an outfit made entirely of raw meat. Gaga accepted her Video of the Year award at the recent Video Music Awards dressed head to toe in 50 pounds of uncooked beef, gristle and all. The reaction has been an odd mix of regular red-carpet slams, culinary quips and animal rights rants. But everyone seems to be skirting around the contextual framework for Gaga’s outlandish getup.

Gaga has recently emerged as possibly the most high-profile pop celebrity to publicly support gay rights and activism, with highly publicized tweets calling for an end to the Don’t Ask, Don’t Tell policy and multiple appearances at marriage-equality rallies. Her website is awash with explicit support for marriage freedom. Gaga’s projects have also evolved into a more deliberately theoretical art practice, most recently with her own version of Marcel Duchamp’s Fountain.

Prior to changing into her carcass dress, Gaga was arm and arm with her dates: four U.S. Armed Service members who had been expelled from the military because of their sexual preference. She later told Ellen DeGeneres that her steak couture was about standing up for those rights.

The Los Angeles Times quickly wrote off Gaga’s get-up as “absolute inanity” and “pointlessly repellent.” Times writer August Brown was sure to qualify this, saying he liked Gaga’s “music and provocations” normally. For Brown, public protest is apparently just not important.

PETA, of course, also felt the need to chime in, quoting Eminem about the flank dress’ stench. One might think that an organization that supports equality and respect for living beings might also give credit to the implications of Gaga’s performance (and yes, I recognize it as not merely a photo op but as a performance which utilizes Hollywood’s uber-lens for the sake of making viewers think). But PETA also chose not to address Gaga’s explicit directives–even though Gaga has assured animal rights’ activists that the dress was later made into beef jerky rather than going to waste.

The use of dead animals in avant-garde art is hardly unprecedented (think: Carolee Schneeman’s Meat Joy) and political statements have for years been a regular part of the VMAs. As Gaga’s work becomes more politically and historically engaged, she increasingly proves to be more than just a vapid celebrity figure. But the question remains: Is the pop music demographic ready for her art practice? The mainstream media obviously is not, and never has been, ready for the art of rupture. But Gaga is one pop princess who refuses to leave political, artistic and activist discourse out of her career, and for this she should be commended.

What do you think of Gaga’s activism and most recent performance?