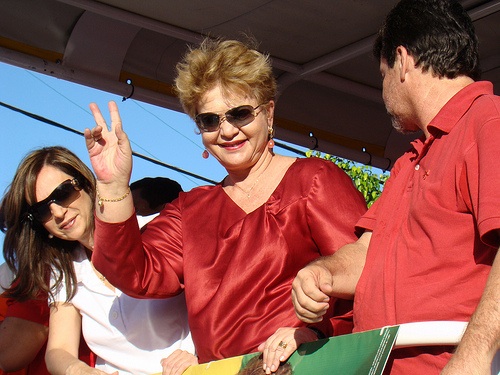 This week, Brazilian presidential candidate Dilma Rousseff  wins the popular vote but heads to a runoff, the U.N. arrests a Congolese officer for leading the rapes of more than 300 women in the Democratic Republic of the Congo, Indian protests against the EU-India trade agreement get violent and Liberia launches Africa’s second radio station for women.

BRAZIL: Presidential candidate Dilma Rousseff, the former chief of staff for wildly popular President Lula de Silva, narrowly missed being the first woman president of Brazil after Monday’s elections. While she led the race with 46.9 percent of the vote, she will once against face the former Health Minister, Jose Serra of the Brazilian Social Democratic Party, in Oct. 31’s runoff. If she wins later this month, Brazil will be the third country in South America to elect a woman president, along with Chile and Argentina. Women’s rights activists point to these elections as evidence of a growing trend of women’s political representation in the continent.

DEMOCRATIC REPUBLIC OF THE CONGO: A Congolese militia commander was arrested on Wednesday, accused of leading the gang rape of more than 300 people, mostly women, in early August. The systematic brutality of the rapes–perpetrated by the Democratic Forces for the Liberation of Rwanda and the Mai-Mai rebels in the eastern region of the vast African nation–garnered international attention and public outcry. Sadoke Kokunda Mayele was arrested by the U.N. after being handed over by his own comrades in the Mai Mai militia, who were enraged that one of the militia’s leader’s own family members was attacked during the episode. Despite celebration over the arrest, U.N. Secretary-General Ban Ki-moon admitted this week that the Democratic Republic of the Congo was too vast and violence-ridden for U.N. peacekeepers to manage.

INDIA: As trade negotiations between the European Union and India make a push towards finalization, violent protests have erupted in India. Opponents of the trade agreement, including Medecins Sans Frontieres (Doctors Without Borders), fear that it will limit the availability of generic anti-retroviral medicine for AIDs patients. India currently produces 80 percent of the world’s generic drugs for treating HIV and AIDs patients, of which an estimated 15.7 million are adult women. The protests in India led to five arrests and were said to be violent. Leena Menghaney, of the Medecins Sans Frontieres Access Campaign, told the BBC, “I have never seen so many police people with batons and guns.”

LIBERIA: In the capital city of Monrovia, Liberian women have launched the nation’s first–and the continent’s second–radio station for women. The Liberia Women Democracy Radio station’s slogan is “voice for the voiceless” in this small African nation struggling to recover from a 14-year civil war. Lady Mai Hunter, a young woman involved in the station, told IPS:

We have a female president and outside of Liberia people think that everything is okay for women here, but it’s not. Sexual exploitation, rape and wife battering are all big problems here.

The mainstream Liberian media rarely covers topics such as violence against women, teenage pregnancy, female genital mutilation and prostitution. Women hope that the station will allow these issues to gain prominence in the political discourse, especially with the impending October 2011 elections.