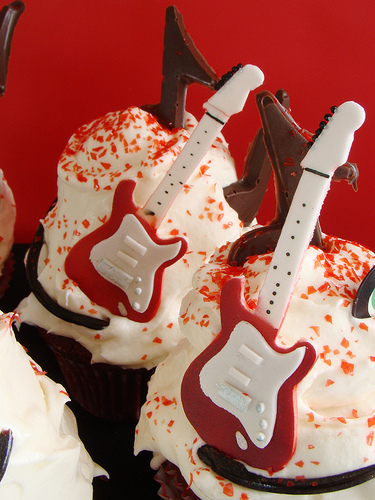 While reading an article on Salon.com, I became distracted by a sidebar entitled, “Glee‘s mysteriously shrinking Rachel.” I enjoy reading criticisms of how awful Glee is as much as the next blogger, so I clicked.

First, in the subhed, the article tries to connect Glee actor Lea Michele’s shrinking body to the quality of the TV show overall, arguing, “The slimming down and sexing up of Lea Michele is another sign that the heartfelt show is losing its warmth.” This assertion is ridiculous: It’s the transphobia, sexism, tokenism, racism, ableism, use of stereotypes as characters, clichéd story lines and lazy writing that make Glee a waste of airspace, not Michele’s skininess.

The part that irked me most, however, was the following:

Listen, I understand the game: She’s in Hollywood, keeping up with her flying star and getting in touch with her ‘vegan’ side. (Back in the day, we used to call it an ‘eating disorder’–now you can hide behind the healthier guise of ‘veganism’ to slim down without all that stigma.)”

OK, let’s get this straight: Veganism is not an eating disorder. Since this isn’t the first time I’ve heard this kind of slur against vegans, some correction is in order.

“Real” vegans–the ones who treat veganism as a lifestyle choice, not the next fad diet–have reasons why they stop eating animal products, believe it or not. And these reasons don’t necessarily include weight loss, no matter how badly PETA shot itself in the foot by asserting that this reason alone is a good one to go vegan.

Reasons to become vegan include, but are not limited to:

Yes, there is such a thing as orthorexia, and yes, I’ve heard of young women who become vegan to lose weight (although without a larger purpose, maintaining a vegan lifestyle is very difficult and people easily slip back into vegetarianism or meat-eating). And yeah, there are vegans who struggle with body image issues. But if you want to look at absolute numbers–since vegans only make up about one percent of the U.S. population–there are a lot more omnivorous women who do that. Body-image issues and eating disorders aren’t strictly vegan issues, but problems afflicting society as a whole.

In my limited experience of seeking out vegans to socialize with, I’ve been pleased to see that most of them are feminist, in their words as well as actions. That includes cis-male, trans-male, trans-female, genderqueer, gay, lesbian and sistah vegans. (I assume intersex and asexual vegans, as well as vegans with disabilities, also exist; I just haven’t met any yet and couldn’t find websites catering to these groups. If you know of any, please link in the comments.) So there’s no need to pit veganism against feminism, as the author’s comment somehow did by suggesting that veganism serves as a cover for body issues. Let’s not lose sight of the common enemy: the kyriarchy, which has shown time and again to prefer lining the pockets of people on top rather than caring about women’s health and dignity.