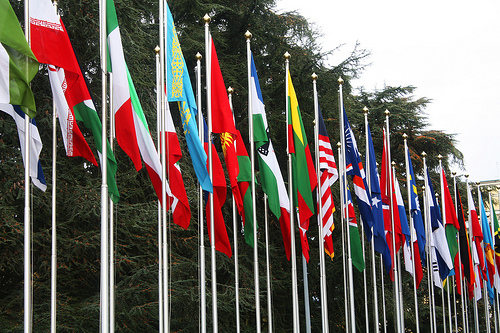 Today, November 5, for the first time, the United Nations will, under its Universal Periodic Review (UPR) system, review the human rights record of the United States. That’s a pretty big deal period, especially since the process is comprised not only of self-assessments by the nation being reviewed, but also reports by civil society organizations.

Undoubtedly, a lot of really important issues (such as prison rape) are going to be addressed by those organizations, and all kinds of human rights violations by the United States are going to be openly discussed. But one issue set for discussion will not only likely surprise observers, but also be considerably underrepresented in any media coverage that the review garners: that of sex worker rights.

A comprehensive national report on sex workers’ rights was prepared by the Best Practices Policy Project and the Desiree Alliance earlier this year. The report draws on the perspectives of networks, such as SWOP USA, and organizations working with sex workers, people in the sex trade and people who are affected by anti-prostitution policies in the United States more generally. Two representatives from the Best Practices Policy Project are currently in Geneva presenting summary recommendations to delegations and encouraging countries to ask the United States questions about it’s human rights record in regards to sex workers and to include issues pertaining to sex workers in the recommendations they will raise in Friday’s session.

The Best Practices Policy Project report [pdf] is a comprehensive document that strongly centers on intersectionality. It emphasizes not only the generalized risks of violence and civil rights violations that sex workers face, but also how those risks are even more severe for those sex workers who are particularly marginalized on the basis of race, trans* status, immigration status and perceived sexual orientation. It’s only 5 pages long and a really strong overview of the oppressions faced very day by sex workers in the U.S., so I urge you to read it.

Before the U.N., the Best Practices Policy Project representatives are presenting the three most key recommendations from the report, which are as follows: (via SWOP-USA)

The United States should implement comprehensive criminal justice reform that includes measures to stop human rights abuses committed in the name of anti-sex trade laws. This would include repealing laws, including laws against prostitution-related offenses, and eliminate policies, such as “prostitution free zones”, that erode legal protections barring law enforcement from detaining individuals on the basis of how they are perceived or the way they are dressed (ie racial and gender profiling). The application of felony-level charges against sex workers and people living with HIV should be halted as should sex offender registration requirements of those arrested for engaging in prostitution. Criminal justice reform must also address the frequency of abuse of sex workers, or those perceived as such, by law enforcement and other state actors. Similarly, reform must ensure that people involved in the sex trade or profiled as such receive appropriate responses from authorities when they are targeted for violence and other crimes.

The United States should ensure health rights for those engaged, or perceived to be engaged, in sex work and the sex trade. In many jurisdictions in the United States condoms are used as evidence of criminal activity in the enforcement of anti-prostitution laws. Individuals involved in street economies face tremendous stigmatization in health care settings. Sex workers urgently need access to health care services including harm reduction oriented programs, which often are prohibited from receiving federal funding.

The United Sates should reorient national anti-trafficking policy to a rights-based framework and repeal the US governments “anti-prostitution pledge” requirement on foreign aid. Migrants involved in the sex trade who experience exploitation require services and legal support, but the response to human trafficking in the U.S. currently focuses on law enforcement approaches that alienate and traumatize victims. U.S. anti-trafficking policies and practices undermine the health and rights of sex workers domestically and internationally, including requiring recipients of HIV and anti-trafficking funding to adopt a stance condemning sex work. These requirements should be repealed.

It’s my personal view that all of these recommendations should be seen as straight-up common sense.

For those who can watch video, the Universal Periodic Review will be streamed live and available for archived viewing here.

Excerpted with permission from The Curvature.