Separate But Equal? The Politics of Plus Size - Ms. Magazine
Skip to content 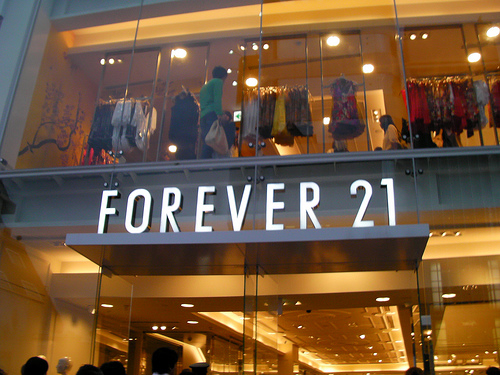 When I opened my Gmail and saw the subject line of the weekly newsletter Forever 21 sends to its customers, I bubbled up with hope. “New Name: Faith 21 Will Soon Be Forever 21+.” Forever 21, a brand I’ve been addicted to since my tweens, was finally taking the admirable step of integrating their plus-size line with the rest of the Forever 21 line. Then I noticed the deal-breaker caveat: the tiny plus sign at the end. My face fell, I heaved a sigh and closed out of the email.

The plus-size section, deemed so egregiously ignoble by normative society that it’s relegated to its own racks and its own corners, has always held my distaste and fascination. In the moment when I thought Forever 21 had blended its plus-size line with the rest of its clothes for young women, I caught a glimpse of something progressive–the abandonment of body politics and the start of a shopping experience that doesn’t single out and exile bigger women.

I’ve never appreciated that Forever 21, a line that predicates itself on modernity, youth and forward-thinking, felt the need to separate their larger sizes. After spending some time browsing through both the plus-size and non-plus size sections, it becomes apparent the only thing separating these lines is size, not style. For all of the other Forever 21-owned spinoffs like Heritage 1981, Forever 21 Twist, Love 21, 21Men and Twelve by Twelve, their separate placement in stores and on websites is clothing style. Is fat a clothing style that merits segregation? Why can’t we all just shop together?

As a former plus-size girl who would squirm over the awkwardness of having to discreetly meander to the plus-size section, I always felt a vague sense of indignation. Instead of staying with my other high school friends, I was being forced to the most foreboding area of the store, with its huge “+” placards and billowy mannequins. It all seemed to scream that I wasn’t normal; I wasn’t average. I was plus. Though I’m a non-plus now, I can’t help but look over my shoulder across the years and the clothing racks and ponder the necessity of the great divide between plus and non-plus. Separate, but definitely not equal.

Defenders of the plus-size section would say that plus-size people know how big they are, that it’s obvious to anyone else in the store and that by giving them their own section stores are just making it easier for them to find clothes that fit. This logic begs the question: Why isn’t there a minus-size section? A special area for abnormally thin girls who can’t fit into average sizes? Because abnormally thin is still considered normal, no matter how far away from normal a girl is. Thus even the wispiest girls are accommodated with size zeros and even double-zeros in the same section with the rest of the clothes.

The average U.S. woman is nowhere near a size zero, but a size 14. According to the Los Angeles Times, that makes 62 percent of our country’s women plus size. But the curvy and the full-figured have become the invisible women of the clothing industry, even though they make up more than half the customers. Forever 21’s top competitors–H&M, Charlotte Ruse and Wet Seal–perform even worse in the plus-size arena. H&M briefly had a plus-size collection within its stores up to size 26, but then discontinued the line within the U.S. in 2005 for “redesign.” Charlotte Ruse has no noticeable plus-size line and only accommodates larger women by offering L and XL sizes. Wet Seal does have a large and stylish plus-size line, but it’s offered online only and the fashion chain shows no signs of integrating plus sizes into non-virtual stores.

Women’s clothing stores have become estranged from the reality of women’s diverse figures. If we’re going to accept all forms of beauty and put an end to the body politics that single out and alienate our larger sisters, one of the biggest battlefronts is on the racks of department stores, clothing retailers and fashion chains. So the decision of Forever 21 to change its extended sizes line to Forever 21+ represents a lateral move at best. As a chain that’s growing rapidly (nearly 500 new stores since CEO Don Chang founded it in 1984) and defining fashion for an upcoming generation, it has the unique chance and responsibility to help change societal perceptions of what the female body should look like.

Photo from of Flickr user Bakkanrecord under Creative Commons 2.0.