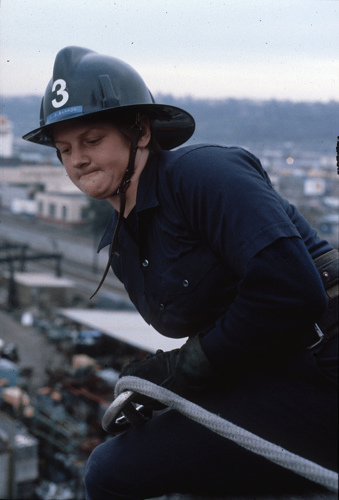 It’s been almost 30 years since American women won the right to work as firefighters. But these brave women, who must pass the same entrance tests as men in the force [PDF], are still fighting to be recognized as “real firefighters.”

“There are incidents where I’ll be out doing work-related tasks and a civilian will ask me if I’m a ‘real’ firefighter. It gets old fast,” says 31-year-old Chelsea Hope. “But I think the more women continue to join the ranks, the less we will face this.”

Firefighter Brenda Berkman recollects that before legal cases such as a 1983 court ruling that permitted women to join the New York City fire department:

It didn’t matter if a woman was an Olympic athlete or 6’7″ tall or the strongest woman on earth–all women were denied the opportunity to even apply to become New York City firefighters prior to 1977.

Berkman was the sole plaintiff in the ’83 case, and subsequently one of the first women employed by the New York City Fire Department, rising to the rank of Captain before her retirement in 2006. She was also among the rescue workers to report to Ground Zero on Sept. 11, 2001.

This year marks the 30th anniversary of women such as Berkman working in fire services across the U.S. In those years, they’ve had to fight hard to get a toehold in the male-dominated profession. Today, women still account for only 3.7 percent [PDF] of the nation’s professional firefighters. Many wear badges that read “fireman” or “hoseman” instead of “firefighter.” Most are still issued baggy, ill-fitting uniforms made for men, which pose a potential hazard during fires by not fully covering their flesh [PDF].

Moreover, according to reports released by The International Association of Women in Fire and Emergency Service (IWomen), 85 percent of women ﬁreﬁghters have experienced some form of sexual and gender-specific harassment on the job [PDF] . Less than 5 percent of those incidents are ever reported. Instead, women tend to leave their positions or continue to take the abuse rather than endure what often prove to be fruitless court proceedings.

I spoke with Jaime Knudsen at the fire station in Oakland, Calif., where she has worked for the last 10 years. She says some men firefighters have shown a lack of support for her as a woman in the profession. “When I’m driving the truck or when on the nozzle, it just doesn’t sit well with the men.”

Women firefighters face public skepticism about whether they are really up for the job. “It’s a physical job. It requires physical strength,” said deputy chief of the FDNY Paul Mannix  in his slight attempt to explain the astonishing gender gap within the FDNY (a mere 25 out of 11,500 New York City firefighters are women).

Such organizations as IWomen are dedicated to bringing women already in the ranks to the forefront while addressing crucial issues that often get lost in the ashes. IWomen has advocated equality for women in the fire service since the early 1980s, and is the only group to address skepticism about women’s competence as firefighters.

Fire Engineer Kim Green, a member of IWomen, is optimistic that women’s ranks will continue to increase. Since 2009, she has been encouraging young women to enter fire apprenticeships through a nonprofit start-up, Camp Blaze, a week-long course in fire safety and real firefighting where she is a counselor. “The more women in the Fire Service, the less we will have to spend on the fight and more time will be dedicated on the job,” she says.

While most women firefighters support aggressive efforts to recruit other women into the fire service, they oppose offering special training programs or efforts to make the physical test easier. Passing the test relies heavily on physical strength: The entrance exams include dragging 200-lb bulky hoses and lifting, throwing and climbing heavy ladders within time limits. Those women who have passed see the accomplishment as evidence enough that they are capable firefighters.

Ultimately, most women firefighters express fierce pride and satisfaction in their work. Sometimes, the only fight worthwhile is saving lives, says Jamie Knudsen while heading onto the truck in Oakland–she’s got to go, there’s been a red-alert.