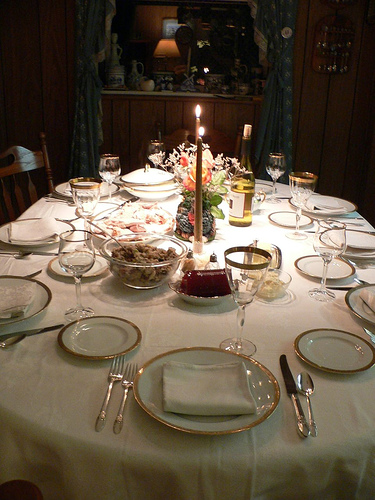 With Thanksgiving drawing closer, many of us look forward to stuffing ourselves like turkeys and plunging into the sugared gluttony that is the hallmark of the classic American holiday. And the news reports say the economy is regaining some steam, so our families should have something to be thankful for this year, right?

So why are tens of millions of Americans still running on empty?

According to the Department of Agriculture’s latest report on food security of U.S. households (a fancy way of saying how many of us have enough to eat), more than 50 million people in 2009 lived in households considered food insecure, where members risked not being able to afford or obtain an adequate supply of food. About 15 percent of households were food-insecure, nearly the same as in 2008. Of the estimated 17.2 million children living in these circumstances, about 5.4 million suffered “very low food security”–a phrase that’s the closest the government will come to acknowledging how many Americans are literally going hungry.

Blacks and Latinos had some of the highest rates of food insecurity, as did single mothers with children and women living alone. So for all the demonization of “welfare queens” in our popular culture, the profile of the poorest women in the country is the worn frame of a mother, trying to scrape by on her own and skipping dinner, again, so her baby can eat.

Overall, despite the recession being finally over, levels of hunger and near-hunger in America remain unchanged. It makes sense, considering that there’s always a swath of chronically poor people at the dregs of the economy in good times and bad. Yet according to a 2009 survey [PDF] by the relief organization Feeding America, local pantries saw more new clients over the past year:

Today, with critical child nutrition legislation stalled, the economy still hobbled, and freshly elected GOP’ers gunning for a budget battle on the Hill, America’s food pantries can look forward to a busy holiday season, welcoming in another wave of new faces alongside all the familiar ones.