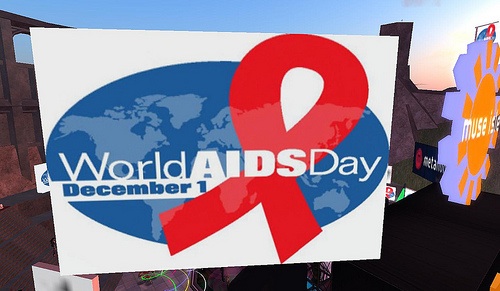 December 1 is World AIDS Day, a time to bring awareness about HIV/AIDS, pay respect to those who have passed and show that comprehensive HIV/AIDS care is a human-rights issue. This year’s theme is “Universal Access and Human Rights” to garner global attention to the rights of persons living with HIV/AIDS and expanding universal access to care, free from any type of discrimination. There are events all over the world, so make sure to attend one near you to raise awareness. Note to Kim Kardashian: Playing dead (or ending your “digital life”) is not a good way of raising awareness, thanks.

University at Albany–SUNY will be hosting this years annual Women’s Studies Student Conference on Thursday, December 2- Friday, December 3, with the theme “Feminist Conversations On Disasters, Divisions, and the Apocalypse .” The conference features opening remarks from Ms.‘s very own Janell Hobson and a performance from another of our writers, Gina Athena Ulysse, a spoken-word poet whose work focuses on the feminist implications of the earthquake in Haiti, plus panels focusing on women and war and the crisis of the public university.

The Boston Initiative to Advance Human Rights, in Cambridge, Mass., is hosting the Human Rights and Sex Trafficking Film Forum 2010 from Thursday, December 2- Sunday, December 5, dedicated to showcasing sex trafficking in a public and academic light. They will be featuring films and documentaries that from around the globe, as well as speakers ranging from filmmakers, survivors, writers, NGO workers and academics.

Friday, December 3 is the International Day of Persons with Disabilities, which promotes better understanding of disability issues and the rights of persons with disabilities. Women with disabilities are much more likely to face workplace discrimination, access to housing and health care, and are more often institutionalized. There will be events observing the day at the UN Headquarters in New York including a film festival and a panel on community development. Events in other locations will be updated closer to December 3.

Are you fond of big hair, power ballads, taffeta and gender-bending? Women, Action and the Media has the perfect event for you. WAM! NYC is hosting a Radical 80s Prom on Friday, December 3 in New York. There will be prom photos, drinks, 80s mashups, and a costume contest with prizes from Babeland. All proceeds from the event benefit Women, Action and the Media and WAM! NYC. Check out more information here.

Transgender activist and author, Kate Bornstein will be appearing at multiple events in Seattle on Saturday, December 4-Monday, December 6. Ingersoll Gender Center will be hosting their annual winter party SnowBall 2010: Double Diamond featuring Bornstein, as well as food, dancing and annual awards. On Sunday, Bornstein will be signing her latest book, Gender Outlaws: The Next Generation and reading from her books that evening at the Museum of History and Industry. Bornstein will wrap up her events in Seattle with a performance at Babeland about “Dangerous Dreams and Damned Desires.”

In Los Angeles, the Women’s International Film and Television Showcase will take place on Saturday, December 4-Sunday, December 5. The showcase aims to recognize and promote women filmmakers as well as publicize their achievements. They will be screening the winners of best film, short and documentary on Saturday. On Sunday, awards will be given for the films and to women within the film and television industry.