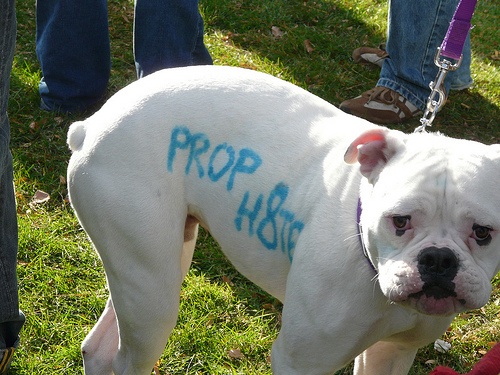 As I’m writing this from the airport–you know, jetting around to fabulous feminist events is a lifestyle for me–I’m thinking about one event  that is particularly important this week: the latest chapter in saga of California’s Prop 8, a constitutional amendment banning gay marriage that may eventually be considered in the U.S. Supreme Court.

Today, lawyers began to argue before the Ninth U.S. Circuit Court of Appeals over Judge Vaughn Walker’s ruling in August that the proposition is unconstitutional. The arguments can be viewed on C-Span; cameras weren’t allowed in Walker’s court, so now you can tune in to hear strange bedfellows David Boies and Ted Olsen argue for marriage equality!

As always in NYC, there are some great feminist events happening this week. On Thursday, December 9, 92Y Tribeca will be playing Brutal Beauty: Tales of the Rose City Rollers, a film about Portland’s roller derby team. Viewers will get to witness both the physicality of the sport and how it has impacted the women who participate.

If roller derby isn’t how you roll, on the same New York night you can catch “F-Word: Feminism, Funny and Fearless,” a night of feminist comedy. Laugh along with co-hosts Abbi Crutchfield and Jen Dziura, founders of Ladybits Comedy, and  featured comedians Jessica Delfino, Hadiyah Robinson and Leah King, and help raise money for Paradigm Shift, which claims to be the Big Apple’s largest feminist community group and event series.

Calling all literature nerds: Director Julie Taymor’s version of William Shakespeare’s The Tempest hits select theaters on Friday, December 10. Taymor (Frida, Across the Universe) subverts the classic about the sorcerer Prospero by turning him into Prospera, played by Helen Mirren. Also starring Felicity Jones and Djimon Hounsou, it will be great to see how both Taymor and Mirren reinterpret Shakespearean with a feminist twist.

On Saturday, December 11, The Brooklyn Museum will host a panel moderated by Courtney E. Martin, co-editor of  Click: When We Knew We Were Feminists, with young feminists speaking about their own “click” moments.

Hollaback is hosting a free webinar that same day on writing op-eds, primarily those focused on street harassment. It will feature author and Ms. Blogger Holly Kearl and journalist, Elizabeth Méndez Berry, whose op-ed piece helped lead to the NYC street-harassment City Council hearing earlier this fall. Writing op-eds is a great way to get your voice heard and whittle down the statistic of 85 percent of op-eds being written by men.  You can attend the webinar from anywhere in the world as long as you have internet access!

If you have any events for the week, post them in the comments. Email me at [email protected] to feature any upcoming events.