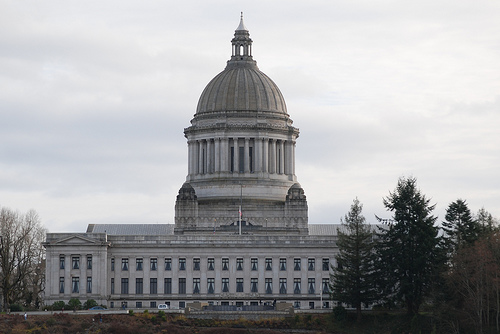 Late last week two bills with the potential to change the way “crisis pregnancy centers” are regulated were introduced in the Washington State Legislature.

According to Legal Voice, a Washington State group which provides legal advocacy for women and a key backer of the legislation, there are 46 such centers in 21 counties operating around the state. The centers pop up to offer “pregnancy care” to mostly lower-income women with no health insurance. The centers target younger women seeking low-cost or free pregnancy testing and unbiased pregnancy options or counseling. What women receive from the centers, however, is what the legislation aims to regulate.

The legislation, among other efforts, requires that LSPCs provide accurate information about the services offered. LSPCs generally provide pregnancy testing or, notes Legal Voice, “sometimes ultrasound imaging or sexually transmitted infection testing.”  Still, it hasn’t prevented the centers from positioning themselves as health care providers, luring women in under the guise of “pregnancy care” and then providing false or misleading information about reproductive health care in an effort to steer women away from choosing abortion as an option.

To combat these efforts, the bills require centers to disclose that they do not “provide services or referrals for abortion or comprehensive birth control” or “medical care for pregnant women.” The legislation would further require the centers to provide pregnancy test results immediately; many such centers delay delivery of pregnancy test results in an effort to delay a decision to have an abortion, or to deny women the option of a safe, legal abortion completely.

“A woman facing an unintended pregnancy needs to be able to count on some standards for any care she receives, no matter what reproductive choice she ultimately makes,” said Rep. Judy Clibborn, the prime House sponsor of the bill.  “Delaying access to pregnancy test results and other personal health information only puts women’s health in jeopardy.”

With 32 co-sponsors so far, the bills seem to have a good chance of passing. Increasingly, regions around the country are reacting to the disastrous consequences of the thousands of unregulated pregnancy centers providing services to unsuspecting and often-times vulnerable young women. As well, the funneling of abstinence-only money into these centers has provided a federal funding foundation for these centers to keep operating; although Texas has proposed to zero out all funding for its crisis pregnancy centers this legislative session.

Holding those centers accountable for providing women with accurate, truthful information about the services provided (and the underlying belief system which fuels those services) is critical to ensuring the health and well-being of women of all ages in Washington State.

Amie Newman is the Managing Editor for RH Reality Check, an award-winning, daily online publication covering global reproductive and sexual health news and information. Amie began her communications career more than fifteen years ago, working in network and public television including MTV, NBC and WGBH. Before landing at RH Reality Check, she spent nine years engaged in non-profit communications and advocacy working for Seattle-based progressive organizations. Amie is proud to have been on the original Board of Directors for the bilingual magazine Our Truths-Nuestras Verdades, now a publication of Exhale. Contact her at amie AT rhrealitycheck DOT org.