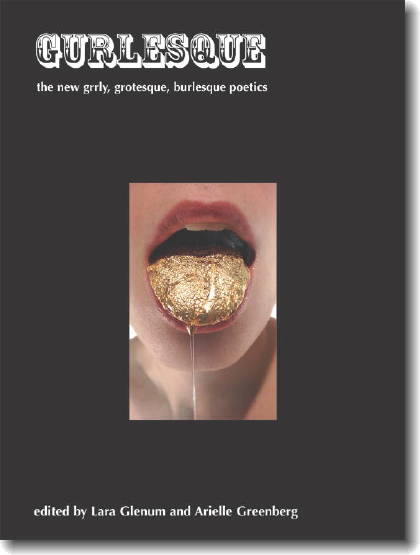 “Poetry is for crap since there’s no money or fast cars in it/ But in the thighs … I feel it.”

–from “Preface 1” by Chelsey Minnis, whose work inspired the term “Gurlesque”

Gurlesque: The New Grrly, Grotesque, Burlesque Poetics “assaults the norms of acceptable female behavior by deploying gender stereotypes to subversive ends,” writes Lara Glenum in her lucid introduction to the recent poetry anthology she co-edited with Arielle Greenberg. Gurlesque spotlights some of the best feminine/feminist poems of the past decade, by Catherine Wagner, Chelsey Minnis, Sarah Vap, Cathy Park Hong, Brenda Coultas and others.

Using parody, kitschy imagery and explosive visuals, these poems interrogate notions of femininity, the body and sexuality. Examining everything from Hello Kitty culture to what happens in our bedrooms, they devilishly expose the complex interior space inhabited by women today, showing the inextricable relationship between constructed femininity and feminism. All the while, the writers poke fun at girly commodity culture by embracing both the glittery and glum aspects of our everyday lives.

Accompanied by 16 scintillating examples of eerie “Gurlesque” (grrly+grotesque+burlesque) visual art pieces, the poems recall Sylvia Plath’s writings on women’s alienation, but with reverberations of the riot grrrl movement. “Riot grrrls also wanted to take back language, take back girlhood, take back their lives,” Greenberg writes. Like riot grrrls, the poets attack unrealistic ideals with aggression, and at the same time find power and pleasure in the often ridiculous mental states they produce.

Quite refreshingly, the poems are not opaque, offering the possibility that dynamic poetry can be enjoyed by the masses. The collection taps into the feminine zeitgeist in laywoman’s terms, thereby targeting both lovers of poetry and those who only grow anxious in its presence. And while these writers are undoubtedly informed by a multitude of highly academic discourses, each piece is approachable–or, what Chelsey Minnis calls in one of her pieces in the book, “A poem that doesn’t have any intellectual filler in it.”

There is more to be done in this vein before political poetry can penetrate a market of fluffy “chick lit,” but this is a daring, juicy read that bodes well for a new popular feminist poetics.