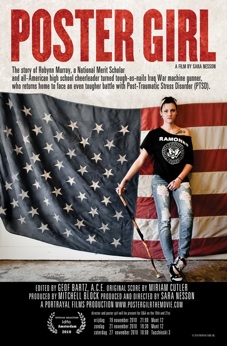 For Iraq veteran Robynn Murray, the current discussion over whether to allow women soldiers to serve in combat is not a debate–it’s a reality.

When the National Honors Society student enlisted in the Army right after 9/11, her recruiter assigned her to a civil affairs unit, promising it would be “just like the Red Cross.” But rather than handing out bandages and food, on her first day in Iraq Murray was handed a machine gun–and told to start firing. As she explains in the Academy Award-nominated documentary film short Poster Girl,

I’m not ‘in combat,’ but I’m taking sniper fire in Baghdad, sitting atop a tank, charged with protecting my entire unit.

The aftermath of Murray’s devastating experience at a war is the subject of the documentary, shot and directed by first-time filmmaker Sara Nesson. The two women met at a veterans’ retreat on Martha’s Vineyard while Nesson was working on a documentary about the Combat Paper Project—a organization that uses art to facilitate healing. At the time,  Murray was struggling with post-traumatic stress disorder and a Veteran’s Affairs office that refused to recognize her disease.

“Robynn stole the camera; I couldn’t stop shooting her,” Nesson said at the recent New York City premiere of the documentary, which will later be shown on HBO.

The film creates a powerful arc, tracing Murray’s descent into PTSD-induced depression and isolation, and her ultimate steps toward healing. The opening scene finds her slumped over a table in her mother’s kitchen in upstate New York, struggling to communicate with the debt collector on the other end of the line.

“May we speak to Robynn Murray?” the voice asks.

“This is she—that is—I’m her!” Murray stammers, only to be rewarded with bad news: The bank wants money and Murray can’t pay. The war left her mentally and physically disabled, but like for so many other “non-combat” women veterans, the VA hasn’t agreed to pay her medical bills.

“I really wanted to focus on the VA aspect, on how [veterans] had to prove that they had trauma,” Nesson said after the screening. That was certainly the case for Murray, whose panic attacks began while she was overseas, becoming so bad that she told an army doctor that she was suicidal. He did not diagnose her with PTSD, and it took her nearly four more years to get a true diagnosis and adequate compensation. Said Murray after the screening,

Unfortunately, the country learned too late about PTSD. The U.S. waited until the rates of suicide for returning vets were higher than the rates of those killed in combat.

Poster Girl also explores the ethics of U.S. involvement in Iraq (Murray now sits on the board of directors of Iraq Veterans Against War), the healing capacities of art and the irony of Murray being a “poster girl” for the military. This is the second time that Murray has been the face of many: Before becoming the subject of Nesson’s documentary, she was the poster girl for military women, her picture plastered on the cover of Army Magazine.

It’s Murray’s real recovery, rather than national politics or questions of representation, that makes this film so powerful. If the opening scene introduces a girl who can barely recognize herself, tripping over the words of a simple self-identification, the ending feels a small triumph, showing an individual successfully fighting her way out of pain. In the last scene, Murray displays the art she made by tearing up her Army fatigues and turning the cloth into paper. With that paper she made decorated sculptures of her torso and, as she shows a gallery crowd her work, she says, “I’m the only vet in the room that could have made that mold.”