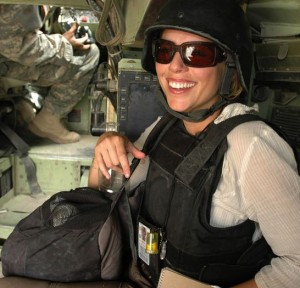 Last Friday, soon after Egyptian President Hosni Mubarak announced he would leave office, a group of men in Cairo beat and sexually assaulted American CBS reporter Lara Logan, after separating her from her crew.

What happened is an outrage. But it doesn’t surprise me. There are men everywhere who use sexual harassment and assault as a way to control women and to scare them off the streets and out of certain jobs. This, sadly, is the latest example.

It also doesn’t surprise me that it happened in Egypt. While harassment and assault of women in public places is a global problem, its occurrence in Egypt is well documented.

A 2008 report by the Egyptian Centre for Women’s Rights found that 83 percent of Egyptian women experienced street harassment as did 98 percent of foreign women. More than 60 percent of Egyptian men openly admitted to harassing women. There are video clips and eye witness reports of mobs of men committing mass harassment and sexual attacks on women during Eid celebrations several years in a row. Last year activists launched HarassMap and women across Egypt use it to share their street harassment stories by text or e-mail.

What did surprise and deeply hearten me was what has happened during the 18 days of anti-government street protest before Mubarak resigned. From Egyptians on Twitter came a stream of reports that harassment had almost totally subsided:

“It seems that the increase in feelings of pride and ownership led to a corresponding drop in harassment,” says HarassMap co-founder Rebecca Chiao. “There was some, you can see the reports on the map. But there was definitely a different atmosphere for a time.”

But then, as the celebrations began on Friday, the attack on Logan might indicate a return to the status quo. Says Ghozlan,

More work needs to get done, because let’s face it, what Lara Logan faced is what Egyptian women [have] been enduring for ages. It’s time we monitor how the society is going to react to such causes after the revolution.

As disappointing as it is to see that street harassment is back—and even more devastating, to know through Logan’s story that so is public sexual assault—I see a glimmer of hope.

The people of Egypt, including women, know their power. I hope their next revolution will be to end gender-based harassment and assault. And I know that many there hope for the same.

After the Logan news broke, these were some of the Tweets I read:

This morning Mohamed Safi created a Change.org petition asking Egyptians to resist sexual harassment. Ending gender-based harassment and assault is the kind of revolution that every country needs.