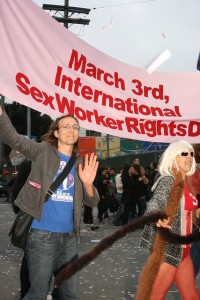 For the past few months, I have been honored to be part of a team of activists and researchers engaging in dialogue with the State Department about human rights abuses against U.S. sex workers, in response to a UN review of the human rights record of the United States. In light of International Sex Workers’ Rights Day today, I will briefly share highlights of this unprecedented historic process.

The Universal Periodic Review (UPR) is a relatively new procedure created by the five-year-old United Nations Human Rights Council. Beginning in 2008 and ending in 2011, the council is reviewing the human rights record of all member states. In November, it was the United States’s turn.

More than 200 recommendations were made to the Obama administration, including the following by member state Uruguay:

Uruguay’s recommendation has generated an exciting and productive dialogue among people concerned with the welfare of sex workers and people in the sex trade. This historic moment has also created a refreshing opportunity to discuss sex work both as a human rights issue and as an issue that cannot be adequately addressed by responses to sex trafficking alone.

Will the US administration recognize this UPR recommendation, and make concrete steps to improving human rights for all, including sex workers (meaning all sex workers, including adult consensual sex workers and those who are exploited or trafficked)? We are hopeful that it will. Judging by the outpouring of support we have received from leading researchers and organizations–representing sexual and reproductive health, law, and criminal justice–we are far from alone in this hope. Several formal letters of support have been received, including from former Surgeon General Dr. Jocelyn Elders, the Center for Health and Gender Equity (CHANGE), and Change.org. Dozens of other researchers, experts, and organizations have given signatures of support including Human Rights Watch, Sexuality Information and Education Council (SIECUS), and Amnesty for Women.

These letters and signatures, along with other documents including a policy brief discussing violence against sex workers, have been submitted to the State Department for review. The policy brief says:

This recommendation from the global community highlights human rights issues that have gone unnoticed for too long. Sex workers—that is people who engage in sexual commerce for income and subsistence needs—are members of families and communities in all parts of the United States. Because of stigma and criminalization sex workers—and those profiled as such—are subjected to violence and discrimination, and are impeded from accessing critical services, such as healthcare, and the right to equal protection under the law. State agents themselves, specifically police officers, commit physical and sexual violence against sex workers. These abuses are particularly rampant in poor and working class, urban, majority African-American and immigrant communities and also greatly affect lesbian, bisexual and transgender (LGBT) people. Globally, the U.S. federal anti-prostitution policies, such as the “anti-prostitution pledge,” have had dire consequences for international HIV/AIDS efforts.

After careful consultation with organizations run by and serving sex workers, as well as human rights activists and members of the State Department, we have made a number of recommendations to the U.S. government. Here they are in brief:

These recommendations, if approved and implemented, will address the needs of a population disproportionately made up of low-income women, but one that is also extremely diverse in terms of sex, gender presentation, sexual orientation, race, class, and nation of origin. In the midst of numerous and devastating political assaults on women’s health care in the U.S., the movement for a human rights policy approach for sex workers and people engaged in sex trade work in the United States is a breath of hope. Stay tuned: The State Department is scheduled to release its response the the UPR recommendations soon.

A version of this post appeared at The Society Pages.