Feminist Backlash, Then and Now - Ms. Magazine
Skip to content

In August 1982, the No Comment section of Ms. magazine decried a decade of premature media eulogies for feminism and the women’s liberation movement.

But the women’s movement wasn’t dead, it was under attack.

In the 1980’s, feminist gains of the previous decade were turned upside down, shaken by the ankles and mutilated by conservatives in an attempt to get women out of their power suits and back into frilly aprons.

By 1992, Susan Faludi chronicled the systematic efforts by mainstream media and conservative politicians to undermine women’s contributions to public life and social discourse in her iconic tome Backlash: Women have stopped having babies! Birth control is the end of America! Put the brakes on reproductive rights and bodily autonomy! Quick!

And oh, the disastrous “man crisis!” What a threat was posed to proper social function when women entered the public realm!

The headlines wore on and on, wishing for–announcing, even–an end to that pesky lady demand for equality.

But wait, just three years ago Newsweek columnist Kathleen Parker engendered popular praise when she railed against feminists for contributing to the death of masculinity in her book Save the Males.

And what about the national attack on reproductive rights that’s unfolded these last few months?

On its tenth birthday in 1982, Ms. rebuffed the backlash: “Is Gloria Steinem dead?” “Is feminism finished?” NO COMMENT, we replied, ironically. For almost 40 years we’ve retained that disposition.

On the first birthday of the Ms. Blog, we’re still laughing in the face of backlash. Today is Feminist Coming Out Day–a day to wave your feminist flag high, say no to anti-woman policy and hold strong to feminist gains of the last four decades.

Inspired by the brave and proud queer community’s National Coming Out Day, Feminist Coming Out Day was launched last year at Harvard where, outraged by inaccurate portrayals of the feminist movement, students donned “This is What a Feminist Looks Like” t-shirts and buttons and visibly reclaimed the name. This year, we’re asking everyone to be an “out” feminist: Laugh in the face of backlash and show your feminist colors. Because we’ve got to. Feminism, still, is under attack.

To celebrate today, tell us why you’re a feminist in the comments. Or participate in our Women’s History Month contest. Wear a “This is What a Feminist Looks Like” t-shirt. Read Ms. and the Ms. Blog. It’s time to reclaim the name! 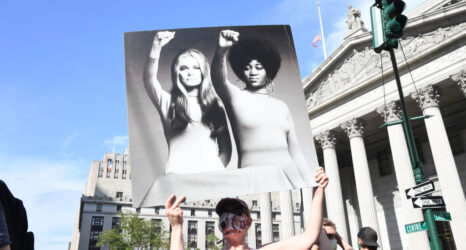