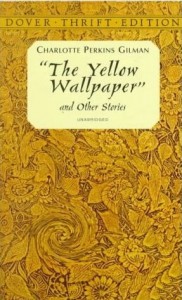 Today, Charlotte Bronte, the author of Jane Eyre, the subject of a big Hollywood film, is not the only 19th-century woman writer newly capturing the public imagination with her portrayal of  a “madwoman” in an attic. Charlotte Perkins Gilman, 1860-1935, is also re-emerging in the spotlight with a bevy of recent books about her, including two absorbing new biographies.

Gilman is most famous for her goth-feminist 1892 short story, “The Yellow Wall-Paper,” about a woman’s prescribed “rest cure” after childbirth and subsequent descent into madness. Since its rediscovery in the 1970s, it has been included in just about every short-story anthology published, iconic for its critique of women infantilized by the medical system. In the story, Gilman takes on and names her own famous real-life doctor, Silas Weir Mitchell, who treated her postpartum depression.  Feminists have critiqued Mitchell as personally defining the “20h-century doctor-patient relationship.”

The first new biography, a must for “Wallpaper” geeks, is the elegantly written Wild Unrest: Charlotte Perkins Gilman and the Making of the Yellow Wall-Paper, by Helen Lefkowitz Horowitz, which, focuses on Gilman’s early life before she published that story. The second one, meatier and ultimately more satisfying–Charlotte Perkins Gilman: A Biography, by Cynthia J. Davis–chronicles her entire life by theme, putting Gilman’s theories in the context of her times.

Certainly Gilman’s prolific body of work (including about a dozen works of nonfiction), dedicated to promoting a woman’s ability to achieve outside of marriage and family, qualifies her as worthy of such attention. Gilman’s 1898 book, Women and Economics, was one of the most influential of the First Wave of the women’s movement. Her freaky 1915 novel, Herland, is still a provocative feminist Utopian vision. Her vast body of poetry is still being discovered by scholars.

And then there’s her personal life, also way ahead of its time. She started with high expectations for social service, being born into a prominent, progressive blue-blooded family, the Beechers, which included great-aunt Harriet Beecher Stowe, author of Uncle Tom’s Cabin, Early in her first marriage, desperate to overcome depression, Gilman left her husband and young child. Particularly scandalous in the press of the time was the part where she encouraged her best friend to marry her ex-husband and become a mother to her daughter–and all three remained friends. Her later second marriage, to her first cousin, was by all accounts a harmonious one of equals.

Horowitz’s book mainly fills gaps in its detailed exploration of what Gilman read in her early years, such as popular scientific magazines. She also thoroughly chronicles the  dramatic ups and downs of Charlotte’ relationship with her first husband, bringing it alive by also telling the story from his point of view, as culled from his journals.

That book whetted my appetite for the second biography, which covers the long-neglected second part of her life and goes much more deeply into Gilman’s many flaws. That includes her elitism, racism and anti-semitism, which came more to light with her support of the anti-immigration movement of the early 20th Century. (In one letter from her older years, Gilman expressed relief in her about leaving New York City for Connecticut to “escape forever this hideous city–and its Jews.”)

Both books also are useful in tracing Gilman’s depression through her family history, dating it back as early as her adolescence. Davis reveals Gilman’s bouts with depression even when she was at the height of her fame and in a solid marriage. This all challenges many prominent 1970s analyses, such as the 1978 “For Her Own Good“, which portrays Gilman as experiencing depression for the first time in her 20s as a subconscious “resistance” to  limited life opportunities. While society’s oppression of women certainly contributed to Gilman’s depression, it may not have been the root cause of a lifelong biological illness, which deserves to be treated as seriously as any other life-altering medical condition.

Since Gilman’s depression has been a heated topic of feminist debate for decades, I would have liked to see Horowitz consider Gilman’s depression later in her life more in her concluding analysis,  and Davis address it more directly. I also kept expecting both authors to consider the obvious question of whether Gilman was bipolar because of their many references to Gilman’s periods of “mania” through her life. (The title of the first book, Wild Unrest, is suggestive.) A major red flag was that Gilman’s depression was most severe after childbirth, since women with bipolar illness are at the highest risk for postpartum depression and psychosis.

If these biographies inspire interest in more analysis, Gilman is also the topic of two other recent books. That includes The Feminism of Charlotte Perkins Gilman, by noted Gilman scholar Judith A. Allen, and the brand-new Charlotte Perkins Gilman: New Texts, New Contexts, edited by Jennifer S. Tuttle and Carol Farley Kessler. Clearly, despite her flaws, Gilman remains a complex and timely thinker, still worthy to explore–and argue about–today.