Good Journalism Is Worth Dying For - Ms. Magazine
Skip to content 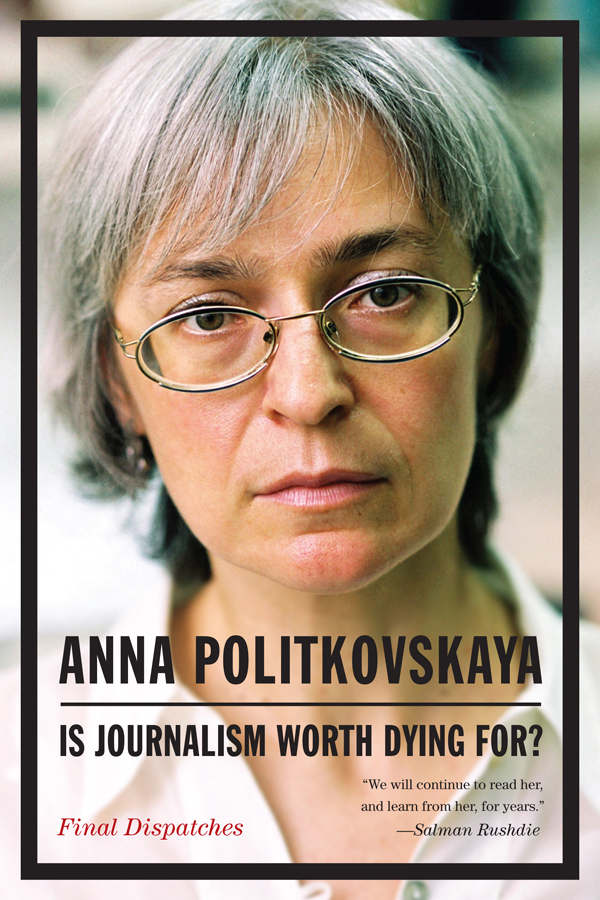 During her career as an investigative reporter in Russia, Anna Politkovskaya was poisoned, tortured, kidnapped and threatened with rape. “What am I guilty of?” Politkovskaya wrote in an article that was found on her computer after her murder in 2006, and which leads the introduction to Is Journalism Worth Dying For?: Final Dispatches, a collection of Politkovskaya’s final writings. “I have merely reported what I witnessed, nothing but the truth.”

Politkovskaya investigated numerous stories of extrajudicial killings, torture and rape during her dangerous and often illegal trips to Chechnya, and in doing so exposed a complex web of corruption among Chechen police officers, high-ranking Russian leaders and business oligarchs. This was no small task for a journalist in a country where critical voices are routinely silenced through intimidation and where progressive journalists rarely have access to the ruling elite.

Most Russian journalists are kovernys, or Russian clowns, Politkovskaya wrote in an article addressed to her international readers:

[Their] job is to keep the public entertained and, if they do not have to write about anything serious, then merely to tell how wonderful the Pyramid of Power is in all its manifestations. … [Journalists] openly admit that they are fed information about enemies by members of the presidential Administration, and are told what to cover and what to steer clear of.

What happens to those reporters who decline to parrot official ideological discourse? “They become pariahs,” Politkovskaya wrote. “I am not exaggerating.”

The journalist won international acclaim for her work, but she was an outcast in her own country and largely unread among fellow Russians. After her death, Putin famously told a Süddeutsche Zeitung reporter that Politkovskaya’s political influence was “quite insignificant inside Russia” and that her death “caused much more damage to the current authorities [in Moscow], and to the Chechen authorities in particular, than her reporting did.”Hundreds gathered in Russia to protest her murder.

Politkovskaya’s work caused a stir in Russia and she knew that she was a condemned woman long before she was assassinated in the elevator of her Moscow apartment building on October 7, 2006. Notoriously brutal police officer Sergei Lapin, also known as “the cadet,” went on trial for his role in the torture and murder of Chechen civilians thanks to Politkovskaya’s fearless investigative reporting into the disappearance of thousands of Chechen civilians. She wasn’t afraid to step on the toes of mighty figures like Vladamir Putin and pro-Russian Chechen President Ramzan Kadyrov, whom she called “the Stalin of our times.”

Is Journalism Worth Dying For? focuses on some of Politkovskaya’s most famous journalistic work produced between 2000 and 2006 while Anna worked for Novaya Gazeta, a small, independent press in Russia. The chapters are organized around major themes like “The Cadet” and “The War in Chechnya.”

“The Last Pieces” includes the first translation of an unfinished article by Politkovskaya that some say led to her execution. The article includes eyewitness accounts of the Chechen squad’s use of torture to produce “voluntary confessions,” and is followed by the transcript of a video that would form the basis of an article that was never written. The video shows two young men being tortured by what appear to be Chechen security agency members; one of the victims has a knife lodged near his ear and is bleeding.

Politkovskaya’s final writings, when read together, commemorate the life and work of Russia’s most influential journalists and serve as a meditation on the practice of journalism itself.

“Feminist” isn’t a designation that is typically used to describe Politkovskaya’s work, but I think that it’s an appropriate term. She chose to focus many of her stories on the suffering of individual men, women and children–victims whose stories are typically lost or ignored in broader accounts of war and genocide. So often we consume recollections of events that are told exclusively in terms of (male) political and military leadership.

Politkovskaya, for thousands of Chechens, was a witness. She documented savage images of blood-stained chopping blocks on Shevskaya Street in Chechnya, and showed her readers the “wretched carnival of infection in the Sunzha hospital,” rows of women, children and elderly Russians and Chechens with amputated limbs that resulted from a series of brutal security sweeps and raids.

“Who will pay for the intensive courses of treatment they will need for years to come?” she wrote in a 2000 article. “The same state budget which today is funding the war that crippled them in the first place?”

Politkovskaya’s work was deeply human, and what many would call “biased.” She declined to give “equal air time” to the Kremlin and she remained critical of the West for taking what she saw as a double-standard on human rights.

In the final chapter of the collection, which includes a series of obituaries and condolences from colleagues, friends and family, Galina Mursalieva, a columnist for the Novaya Gazeta writes of Politkovskaya:

I remember her coming back after receiving all sorts of amazingly prestigious awards. There was no celebration, no joy, only disappointment. … The individuals on whom people’s fates depended, who might have brought about a breakthrough in the situation, didn’t want to lift a finger to help. It wasn’t just Russia, it was the world. It just wanted to buy her off. She was being left alone with a burden she could hardly bear.

After visiting fellow journalist Misha Komarov in the hospital after he was beaten in 2003, Politkovskaya wrote: “So, is it worth sacrificing your life for journalism? How does each of us make or choice?” Her work took an enormous personal toll, but for her the hope of democracy was worth the cost. She wrote:

Undemanding media cater for an undemanding public, ready to agree with everything it is told. The more there is of the former, the more monolithic the latter becomes, and the less opportunity society has of seeing what is wrong with the circumstances in which it lives.

Poor journalism gives way to a kind of social amnesia that allows us to dismiss human suffering, or that makes us blind to our own complicity in the perpetuation of injustice.