Two Arrests and Still No Justice for Abigail - Ms. Magazine
Skip to content 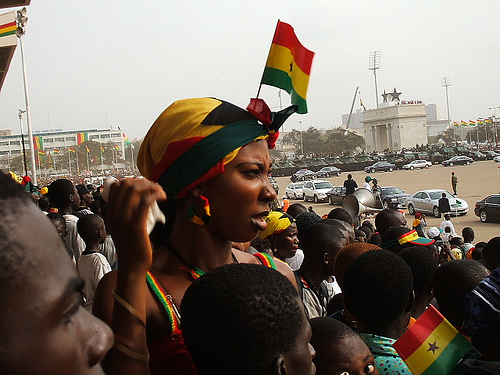 Two weeks ago, Ghana News Agency reported two arrests in the death of 28-year-old Abigail Agborku, a mother of three who died in January following an unsafe abortion. But neither arrest is of the back-alley doctor who botched her abortion. Instead, her mother and husband have been arrested for allegedly convincing her to seek the termination of an unwanted fourth pregnancy, giving her the money for the service and directing her to the quack doctor who would eventually cost her life. The “doctor” is still at-large.

Ironically, Ghana has one of the more liberal abortion laws in Africa. This mother of three died needlessly from an unsafe abortion which cost her 90 Ghana cedis, when she could have received a safe, legal abortion anywhere in the country for just 30 Ghana cedis.

The full details of what precipitated Abigail’s tragic death will probably never be known. But hers is a common story in Ghana, where unsafe abortion remains a leading cause of maternal death. Just because a law is liberal doesn’t mean women are getting the access they need. Putting services in place is key, and the Ghanaian government has led efforts to train doctors and midwives throughout the country to provide safe abortion services. But there are many factors that contribute to whether or not a woman will even seek those services.

Abortion in Ghana is a highly sensitive issue, like it is mostly everywhere, and religious and cultural taboos make it difficult to talk about. This, in turn, enables misinformation to persist and multiply. In Abigail’s case, though it is impossible to know for sure, there are myriad ways in which stigma and lack of knowledge might have conspired against her. A woman seeking to terminate her pregnancy would likely only discuss the issue with a select few, and probably take the recommendation of a friend or family member over anything else. She might not have known that abortion is legal in Ghana, or she might not have understood the risks of visiting an untrained provider. She might have been so desperate that she didn’t care.

Stigma on abortion is perpetrated by the media, which can reinforce the lack of knowledge of the general public. Reporting on Abigail’s death would be an opportune time to restate Ghana’s abortion law and remind readers that services are safe, legal and affordable. Instead, it focuses on the crime, taboo and intrigue of her death. Abigail is de-humanized and the issue abstracted in such a way to actually reinforce the taboo around.

Stigma around abortion persists globally. In broad global discussions about maternal health and the achievement of Millennium Development Goal 5, you’ll notice that the “A” word very rarely makes an entrance. Yet unsafe abortion remains a leading contributor to deaths and injuries, and is the only entirely preventable cause. There is good reason to believe that MDG5 will never be achieved without addressing unsafe abortion head on. The WHO recently released figures showing that the number of deaths due to unsafe abortions globally is down, yet still nearly 50,000 occur each year. Sub-Saharan Africa bears a disproportionate burden.

While important progress is happening in Ghana–maternal deaths are down, safe abortion services are being rolled out and broad contraceptive campaigns are giving women new options–we cannot underestimate the power of social, cultural and religious stigma to influence women’s decisions about their bodies and health.

The article points the blame to Abigail’s mother and husband, sidestepping the real issues. The blame should be positioned more broadly, for this was a failure of an entire health system and, in some ways, a society. The system failed Abigail; we failed Abigail. Her death should serve as a reminder of why the work of reproductive rights advocates is so absolutely critical–in Ghana, but also in the U.S. and worldwide. We each have a role to play as individuals who comprise the social environment in which a woman exercises her reproductive rights. We can shame and persecute, or we can support and facilitate.