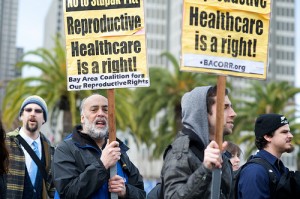 Today, the U.S. House of Representatives passed Rep. Chris Smith’s controversial bill, H.R. 3, the infamous “No Taxpayer Funding for Abortion Act.” You might remember this as the bill that attempted to redefine rape as “forcible rape” as part of its restriction on federal funding for abortions. After activists loudly condemned the bill in February, Republicans removed the language that would have limited Medicaid funding for any abortion that did not meet the narrow definition.

That has not kept Republicans from attempting to limit who can receive U.S. funds for abortions. This time, they want to prevent Medicaid from paying for abortions in the case of statutory rape–but you would never understand that from reading the text of the bill. Mother Jones’ Nick Baumann explains how House Republicans are still achieving their goal of limiting federal funding, without much notice from the public:

The backdoor reintroduction of the statutory rape change relies on the use of a committee report, a document that congressional committees produce outlining what they intend a piece of legislation to do. If there’s ever a court fight about the interpretation of a law—and when it comes to a subject as contentious as abortion rights, there almost always is—judges will look to the committee report as evidence of congressional intent, and use it to decide what the law actually means.

In this case, the committee report for H.R. 3 says that the bill will ‘not allow the Federal Government to subsidize abortions in cases of statutory rape.’ The bill itself doesn’t say anything like that, but if a court decides that legislators intended to exclude statutory rape-related abortions from eligibility for Medicaid funding, then that will be the effect.

The bill goes beyond the Hyde Amendment, which has banned federally-funded abortions for the past 30 years except in cases of rape, incest or threat to the woman’s life. Furthermore, H.R.3 denies tax credits to small businesses that purchase a health insurance policy that includes abortions–currently 87 percent of private insurance plans do–and enacts strict requirements for private insurance companies that cover abortions.

Additionally, the bill eliminates privately funded insurance coverage for abortion in the health-care exchanges (marketplaces for insurance purchasers) established by the Affordable Care Act. NARAL Pro-Choice America estimates that 13.5 million women who receive health coverage through Medicaid and other government-sponsored programs will permanently lose access to abortion coverage if the bill is made law.

If all that wasn’t bad enough, the bill effectively turns IRS agents into “abortion cops.” The law forbids women from using tax benefits (such as credits or deductions) to pay for abortions. Therefore, to ensure that taxpayer money does not go towards the procedure, IRS agents would have to ask questions like, “Were you raped? Was it incest?”

Finally, the bill includes a provision that prevents women in the military from having abortions on federal property, such as military bases. So if a woman in the Army gets pregnant while stationed in Afghanistan, she would have to find a doctor locally to perform the procedure or return to the U.S.

The bill passed 251-175. Fortunately, Capitol Hill observers say that the Democrat-controlled Senate is highly unlikely to pass it, and even if they did President Obama has vowed to veto the bill.