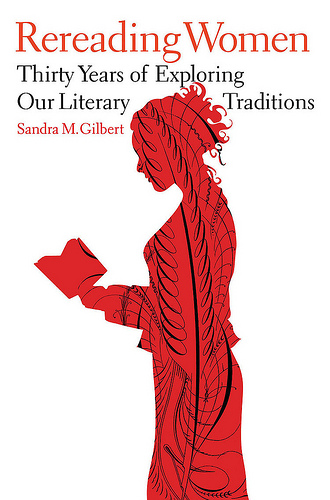 “Is the pen a metaphorical penis? Literary paternity implies ownership!”

When I pulled my well-worn copy of Sandra Gilbert and Susan Gubar’s 1979 classic The Madwoman in the Attic off the shelf the other day, I found these words scrawled across a Post-it, tucked inside its pages. Not in my handwriting (most likely written by one of the many students with whom I have shared this pioneering study of 19th-century women writers), the note–with its provocative question followed by a Click!–perfectly captures the spirit of the 1980s, when Women’s Studies was in its infancy and feminist literary criticism was learning to fly.

In Gilbert’s new book Rereading Women: Thirty Years of Exploring Our Literary Traditions, she recounts the voyage of discovery she took with Gubar in the mid-1970s, when they team-taught a course on women called “The Madwoman in the Attic.” They got so caught up in the excitement of teaching new material and revisiting familiar texts that they decided to write a book together. Thus began one of the most famous partnerships in literary criticism.

Gilbert and Gubar are to feminist criticism what Strunk and White are to writing–a brand name, a franchise. Focusing on the anxieties of female authorship, they brought Lilith and Snow White into conversation with Jane Austen and George Eliot. They showed how 19th-century English and American women authors were alienated from the male-dominated literary canon, and argued that a tradition of women’s writing was there all along and deserved to be recovered and preserved.

Gilbert and Gubar packaged the tradition of women writers for classroom use in 1985 when they published the first edition of The Norton Anthology of Literature by Women: The Tradition in English. Twice revised to broaden its diversity and scope, this anthology–equal in heft to its canonical brother, The Norton Anthology (which contained mostly men)—gave women writers their due.

As someone who started graduate school in 1984, I became the feminist I am thanks in part to the Madwoman and the Gilbert and Gubar anthology. Back then, at the University of Virginia, there were no courses on feminist theory, and so a group of feminist profs and grad students gathered in lounges, stray classrooms and shag-carpeted living rooms to read and discuss hot-off-the-press books and articles. When I tell my own students about that time, I say we felt like renegades, misbehaving in the halls of power, asking questions that felt urgent, fresh, alive. At the end of the decade we would find ourselves in the trenches of the culture wars, accused of hating dead white male authors and of destroying western culture. But by then Women’s Studies had become an established academic field. Good times, bad times.

More than half of the pieces in Gilbert’s new collection were written before 1990 (all but two were previously published), and convey the sense of what she calls her “curiously hybrid literary life.” A self-described “modernist Romanticist-poet-critic” and “feminist-theorist-coauthor-editor,” Gilbert unites a lyrically rebellious sensibility with old-school close-reading skills, peeling back layers of meaning from literary texts as well as the material of her own life.

Although I love reading Gilbert’s literary criticism–and there are insightful essays analyzing Jane Eyre, Emily Dickinson, Elizabeth Barrett Browning–I like best the places where the book gets personal. For example, in a stunning piece entitled “‘A Fine, White Flying Myth’: The Life/Work of Sylvia Plath,” she tells where she was when she learned of Plath’s suicide, drawing parallels between the “Plath Myth” and a “mythological way of structuring female experience.”

“‘Dare You See a Soul at the White Heat?,” in which she discusses her own poetry on Emily Dickinson, brings Gilbert’s hybrid self full circle. She’s a critic who has written poems about a famous poet, which she then analyzes, waxing poetic as she examines her desire to learn from and ultimately unite with Dickinson’s spirit:

How did Dickinson’s artfully frightening self-reifications influence me as a poet? Confronting a radical bereavement as I had to some years ago, I think I learned from her to reimagine myself as an ‘it’–an abandoned thing teetering on the lip of the world.

The last line of this essay reads like poetry:

… I still dreamed of leaning on the glittering sugar cane that she shaped in the white heat of her oven, even when she grieved, even when she shuddered.

Given the swath of time covered by the book–three decades–I would have liked to see more material that addressed changes that have taken place in feminist literary criticism during this period. In its most recent incarnation, The Norton Anthology of Literature by Women has expanded to include more writing by women from around the world. Transnational feminism, queer studies and ideas about intersectionality have changed the way we think about literature, and it’s surprising that Gilbert doesn’t really take up those perspectives in the essays presented here.

Nonetheless, Rereading Women is an impressive career retrospective by an author who inspired generations of readers to rethink tradition and reimagine their place within it. To feminist literary critics and students, she opened up new paths of discovery and urged us to believe, as she eloquently puts it in one essay, “that through literary study we can renew our lives.”