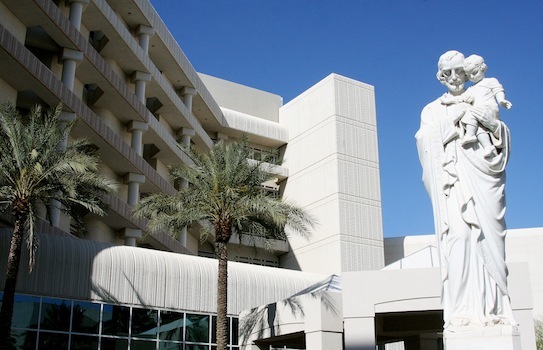 Kathleen Prieskorn gasped in shock as her medical nightmare began. Still reeling from the heartbreak of an earlier miscarriage, Prieskorn was three months pregnant and working as a waitress when she felt a twinge, felt a trickle down her leg and realized she was miscarrying again.

She rushed to her doctor’s office, “where I learned my amniotic sac had torn,” says Prieskorn, who lives with her husband in Manchester, N.H. “But the nearest hospital had recently merged with a Catholic hospital—and because my doctor could still detect a fetal heartbeat, he wasn’t allowed to give me a uterine evacuation that would help me complete my miscarriage.”

To get treatment, Prieskorn, who has no car, had to instead travel 80 miles to the nearest hospital that would perform the procedure—expensive to do in an ambulance, because she had no health insurance. Her doctor handed her $400 of his own cash and she bundled into the back of a cab.

“During that trip, which seemed endless, I was not only devastated, but terrified,” Prieskorn remembers. “I knew that if there were complications I could lose my uterus—and maybe even my life.”

Ordeals like the one Prieskorn suffered are not isolated incidents: They could happen to a woman of any income level, religion or state now that Catholic institutions have become the largest not-for-profit source of health-care in the U.S., treating 1 in 6 hospital patients. And that’s because Catholic hospitals are required to adhere to the Ethical and Religious Directives for Catholic Health Care Services—archconservative restrictions issued by the 258-member U.S. Conference of Catholic Bishops.

Because of the directives, doctors and nurses at Catholic-affiliated facilities are not allowed to perform procedures that the Catholic Church deems “intrinsically immoral, such as abortion and direct sterilization.” Those medical personnel also cannot give rape survivors drugs to prevent pregnancy unless there is “no evidence that conception has already occurred.” The only birth control they can dispense is advice about “natural family planning”— laborious daily charting of a woman’s basal temperature and cervical mucus in order to abstain from sex when she is ovulating—which only 0.1 percent of women use.

Catastrophe was only narrowly averted in 2009 when a 27-year-old, 11-weeks-pregnant patient in Arizona staggered into the emergency room of St. Joseph’s Hospital and Medical Center in Phoenix with such severe pulmonary hypertension that her doctors determined she would die without an immediate abortion. The ethics committee voted to break hospital policy and advise the woman of her option of a lifesaving abortion. The woman chose to have doctors terminate the pregnancy.

But when the bishop overseeing the Phoenix diocese heard about this, he declared that St. Joseph’s could no longer be a Catholic institution unless it agreed to follow Catholic “moral teachings.” The Bishop forbade Catholic Mass in the hospital’s chapel and excommunicated Sister Margaret McBride—the only nun on the ethics committee.

The Phoenix story drew national outrage, but lesser-known cases of religious doctrine affecting medical care are rampant. In Oregon, a bishop threw out a medical-center director from his diocese for refusing to stop sterilizing patients. In Arizona, a couple raced to a Catholic hospital ER after the wife miscarried one of a pair of fetuses, only to be sent to a secular facility after doctors determined that the twin fetus was still alive—though not viable. And in New York, doctors at a Catholic institution neglected to terminate an ectopic pregnancy (in which the fertilized egg begins to develop outside the uterus) even though the embryo could not possibly survive and the patient faced a potentially fatal rupture of her fallopian tube.

How did we get to the point where 258 right-wing bishops—all (supposedly) celibate male clerics—are prohibiting doctors from practicing medicine and denying women essential reproductive care? The debacle starts with anti-choice legislation. The U.S. Congress started to pass “conscience clauses” pushed by the Roman Catholic Church and anti-abortion forces in the immediate wake of the Roe v. Wade Supreme Court decision that legalized abortion in 1973. Today, these laws apply not only to physicians and nurses who oppose abortion, but to entire institutions whose “consciences” allow them to withhold medically indicated care.

Even as recently as 2008, the George W. Bush administration issued sweeping regulations to give health-care workers the right to refuse to take part in any procedure that “violates” their religious beliefs. The Obama administration moved to reverse this policy in February (making it explicit that contraception is not covered by conscience provisions), but 47 states and the District of Columbia now allow individuals or entities to refuse women reproductive health services, information or referrals.

You don’t have to be a Catholic to end up at a Catholic hospital that refuses you lifesaving care. A Catholic facility might be the only one in your area, and when you expect treatment you may get dogma instead.“Religion in America should mean that the church runs the church,” says Barry Lynn, the executive director of Washington, D.C.-based Americans United for Separation of Church and State. “It shouldn’t mean the bishops are running your reproductive life.”

Photo of St. Joseph’s Hospital and Medical Center in Phoenix by Serwaa Adu-Tutu.

Excerpted from the Spring 2011 issue of Ms. To read the full story and have this issue delivered straight to your door, join the Ms. community.