Diary of a Chambermaid? - Ms. Magazine
Skip to content 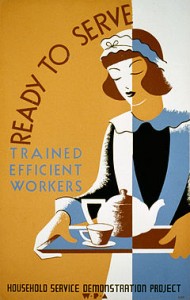 As everyone now knows, International Monetary Fund managing director Dominique Strauss-Kahn was arrested on Saturday in dramatic fashion, hauled out of his first-class seat on an Air France plane at New York’s JFK Airport just as it was preparing for take off to Paris. Shortly after the arrest, NYPD spokesman Paul J. Brown explained that Strauss-Kahn was being held “on charges of criminal sexual act, attempted rape and an unlawful imprisonment in connection with a sexual assault on a 32-year-old chambermaid.”

Other news agencies over the past few days have also referred to the accuser as a chambermaid or, more commonly, simply as a maid (maids still get to wear those cute outfits, right?). That’s the term currently favored by news outlets such the Washington Post, the Associated Press, and USA Today, among many others.

To be sure, if the goal is to milk this thing for all its worth, identifying the alleged victim by her official job classification probably isn’t the best idea. But if the goal is to report the news, then journalists would seem to have an obligation to set the titillating rhetoric aside and accord this woman the respect she deserves by referring to her occupation by its proper name–and it’s not chambermaid.

According to eminent labor historian Professor Dorothy Sue Cobble of Rutgers University, the term chambermaid is “archaic.” And having conducted my own admittedly unscientific survey of service-sector employment websites, I can say with confidence that no respectable hotel on the planet today uses the terms chambermaid or even maid as official job titles. Instead, most hotels refer to the field in question as “housekeeping,” and most often people working in this field are referred to as “housekeepers.”

Of course the Sofitel in Manhattan, where Strauss-Kahn was staying in a $3,000-a-night suite, is no ordinary hotel, and so it’s not surprising to discover that it eschews the pedestrian term “housekeeper.” Instead, as Sofitel spokeswoman Stacy Royal informed me in an email exchange on Monday, the hotel employs the term “room attendant.”

Shocking, right? I mean, who would have thought that women who make a living cleaning up after the privileged have been granted such a dignified, gender-neutral and totally un-sexy job title? I know, I know—the story of a chambermaid being chased around a swanky hotel room by a world-class Romeo goes down better with your morning cappuccino than a just-the-facts story of an alleged rape. But is it really too much to expect the media to refrain from perpetuating the kind of disrespectful attitude toward women working in the “hospitality” industry that has made them so vulnerable to sexual harassment and sexual abuse in the first place?

Cleaning hotel rooms may not be glamorous, but it is a job, and those who do it deserve our respect (let alone a fair wage and benefits). It may be inconvenient when it comes to the business of selling the news, but the truth is that there really isn’t anything very sexy about cleaning hotel rooms. Ditto sexual abuse and attempted rape. And shame on anyone who would try to make it seem otherwise.

Dr. Juliet Williams is an Associate Professor of Women's Studies at the University of California, Los Angeles. She writes the Feminist Takes on Sex Scandals Blog (http://sexscandalblog.blogspot.com). Her books include Public Affairs: Politics in the Age of Sex Scandals (co-edited with Paul Apostolidis, Duke University Press, 2004).