Censored Cover Raises Question: Why Are Breasts "Obscene," But Not Chests? - Ms. Magazine
Skip to content

The cover of this month’s Dossier Journal magazine has caused a great stir. In a matter of a few hours, I’ve received five emails about it. Here’s what all the fuss is about: 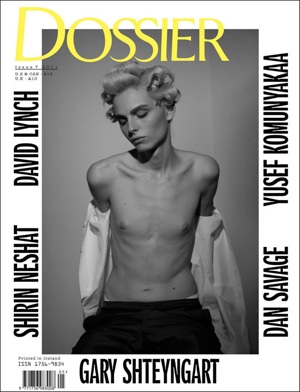 Featured is an androgynous male model named Andrej Pejic, with hair and make-up usually seen only on women, sliding his shirt off his back. Some might say that the image deliberately blurs gender. Are we seeing a chest or small breasts? It is not immediately apparent.

Both Barnes & Noble and Borders “bagged” the magazine, as they do pornographic ones, so that the title of the magazine is visible but the rest of the cover is hidden. Barnes and Noble said that the magazine came that way, representatives for Dossier say that the bookstore “chains” required them to do it.

Non-ambiguously-male chests pepper most magazine racks, but this man’s chest hints at boobs. And so he goes under wraps.

Explaining why it is legal for men to be shirtless in public but illegal for women to do the same, most Americans would probably say women have breasts and men have chests. Breasts, after all, are…these things. They incite us, disgust us, send us into grabby fits. They’re just so there. They force us to contend with them; they’re bouncy or flat or pointy or pendulous and sometimes they’re plain missing! They demand their individuality! Why won’t they obey some sort of law and order! Much better to contain those babies.

Chests … well they do have those haunting nipples … but they’re just less unruly, right? Not a threat to public order at all.

So, there you have it. Men have chests and women have breasts and that’s why topless women are indecent.

Of course, it’s not that straightforward.

It’s not entirely true that women have breasts and men have chests. Many men have chests that look a bit or even a lot like breasts (there is a thriving cosmetic surgery industry around this fact). Meanwhile, many women are essentially “flat chested,” while the bustiness of others is an illusion created by silicone or salt water. Some women diagnosed with breast cancer have their breasts removed, but they’re still not allowed to go shirtless. So is it really breasts that must be covered?

Unless that man’s gender is ambiguous; unless he does just enough femininity to make his body suspect. Indeed, the treatment of the Dossier cover reveals that the social and legal ban on public breasts rests on a jiggly foundation. It’s not simply that breasts are considered pornographic. It’s that we’re afraid of women and femininity and female bodies and, if a man looks feminine enough, he becomes, by default, obscene.

Adapted with permission from Sociological Images.