Rape Is Still Rape, And No Still Means NO! - Ms. Magazine
Skip to content 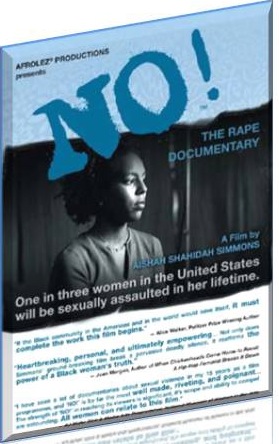 It took filmmaker and activist Aishah Shahidah Simmons 13 years to fund, produce, direct and release her inspirational and defiant NO! The Rape Documentary. NO! brings together archival footage, testimonies of rape survivors, performances and interviews with activists and scholars to examine rape in African American communities through a black feminist lens. The international acclaim for the film–it’s been screened in Africa, Asia and Europe as well as South and North America–confirms that black women’s stories resonate across all borders. In spite of differences in culture and language, many women see NO! as telling their own stories.

NO! isn’t a new film–it came out in 2006–but in a climate in which rape makes daily headlines as a tool to subjugate and terrorize women, it’s as timely as ever. When DOXA invited Ms. magazine’s global editor, Robin Morgan, to guest curate a film for this spring’s festival in Vancouver, Canada, she immediately chose NO! And when the Spring issue of Ms. magazine challenged the FBI’s dangerously narrow definition of rape in bold neon letters, I too thought of NO! and Skyped Simmons to talk about her groundbreaking film, the FBI’s archaic definition of rape, the gang rape of an 11-year-old girl in Cleveland, TX, sex trafficking and many other issues.

“NO! gives voice to the experiences that the majority of us have had —and I speak as a victim and survivor of acquaintance rape,” said Simmons during our conversation. Acquaintance rape is especially prevalent on college campuses, and is often drug- or alcohol-induced. But according to the FBI’s Uniform Crime Report (UCR), many such crimes–including that perpetrated on Simmon’s–don’t even count as “forcible” rape. Though she didn’t have any physical wounds, though, Simmons affirms that the rape “was violent because my body was violated” and the bottom line is “I said no!”

Another woman featured in NO! wasn’t penetrated, but was violated in a number of other ways. As Simmons pointed out,

When we limit ourselves to definitions of ‘forcible rape,’ we’re not dealing with how pervasive and real sexual violence is in our culture and how it impacts so many of us.

Those limited definitions mean that rapes go underreported and a number of them that are reported are dismissed as unfounded. On college campuses alone, 20 percent of women will be victims of sexual assault (and 6 percent of men), but only 5 percent will report those assaults.

I think conversations are changing. There’s more of a willingness to talk about rape. I’ve seen more men–not enough, but more men–who are taking on this issue.

Indeed, one of the most powerful statements that NO! makes is that while improved legislation will help combat rape, women and men have to work together to create communities that refuse to tolerate sexual violence:

The community has to be involved. We can’t just rely on the criminal injustice system. What would it look like in our communities if we held men accountable? If men held men accountable? If the reality-definers–the judge, the pastor, the Imam, the Rabbi, the teacher–all say, ‘This is not tolerated!’ So many institutions are so busy trying to ‘protect’ the rapist, protect his ‘reputation,’ we’re not thinking about the ways we can create spaces where not only is rape not tolerated but where people don’t want to harm.

That impulse to safeguard the reputations of the accused and criminalize the victim was seen most recently in the coverage surrounding the Cleveland, TX, gang rape. A New York Times feature by James C. McKinley garnered criticism from feminists and other supporters of women’s rights for casting blame on the victim. More recently, “Slut Walks” have erupted in Canada and across the country to confront the accusations lobbed against rape victims. Even if a woman is “butt naked,” Simmons intones, “why is the penalty rape?!”

Simmons plans to return to gender-based violence in her new work. She’s currently collaborating with three other women on a global documentary that looks at sexual violence in African-descended and indigenous communities. She’s filming in West Africa, South America, North America and New Zealand. “It’s a huge project in its very embryonic stages,” she says:

I thought I was going to be taking a break, but the reality is violence against women is alive and well and it’s a global epidemic.

Growing incidences of sex trafficking have further complicated the global struggle against sexual violence. Simmons remembers first learning of sex trafficking about a decade ago when her father worked in Hungary. International coverage of the crime then seemed to focus most heavily on the trafficking of Eastern European women, but today Nigerian women make up a large number of sex trafficking victims in Europe, especially in Italy. In the U.S., sex trafficking has also reached epidemic proportions, but missing black and Latina girls get both less media attention than their white counterparts and are also more likely to be criminalized and treated like adults.

As she continues to tour internationally with NO!, Simmons is heartened by the film’s ability to raise consciousness and help women find their voices. She told me:

I see the power of the medium [film] and I have more of an appreciation for why NO! took so long. When you’re making grassroots black feminist media that really centralizes and prioritizes the safety and wellbeing of black women and girls, that’s not viewed as very important. The power of the medium of film, as I learned from Toni Cade Bambara, is that it teaches us to identify with those images we see. So to be in Eastern Europe and have women say ‘this is my story’ and talk about black women’s stories being their stories, that’s revolutionary.