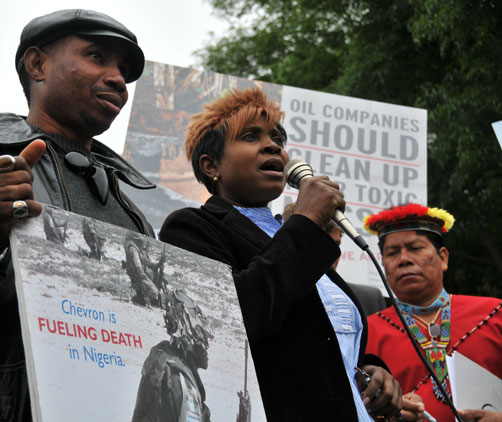 Women traversed the globe from as far as Ecuador, Nigeria, Colombia and Indonesia to make their voices heard today at Chevron’s annual shareholder’s meeting in California. In contrast to last year–when activists were denied the mic–22 indigenous, First Nation and other community activists spoke at the meeting, supported by 150 protesters who gathered outside.

Chevron is America’s third largest company, with $19.1 billion in profits last year. It is also one of the several oil companies that benefit from the $4 billion in annual tax breaks the Senate voted to continue last week. According to Chevron’s YouTube page and its “We Agree” ad campaign, it has used these immense profits to help the environment, keep workers safe, and promote education. In its 2010 annual report, CEO John Watson calls 2010 “an outstanding year for Chevron.”

Women worldwide who say they have experienced the horrific environmental and human health tolls of Chevron’s business tactics beg to differ on all counts. They joined with other activists at GlobalExchange to create a third annual alternative annual report [PDF] for Chevron. It demands that instead of trying to clean up its image by greenwashing its ads, the corporation clean up its act. The introduction reads:

We, the communities who bear the costs of Chevron’s operations, have witnessed a year in which Chevron’s performance was anything but exceptional … Chevron continues its long history of ravaging natural environments, violating human rights, ignoring the longstanding decisions of Indigenous communities, destroying traditional livelihoods, and converting its dollars into unjust political influence in the United States and around the world.

The report, The True Cost of Chevron: An Alternative Annual Report, addresses [PDF] the “egregious corporate behavior” of Chevron in 2010, contending that it has inflicted immeasurable environmental, health and cultural damage, including:

Today, representatives of communities affected by these projects traveled to California to attend the corporation’s annual shareholder’s meeting and present the report. Last year, Chevron refused to hear the stories of these representatives, even barring 17 legal proxy holders from attending the meeting–leaving them standing on the street corner outside. Emem Okon of Nigeria was one of these banned delegates, and she spoke this year, saying:

I am here to represent the women of the Niger Delta who live in communities near gas flares and who suffer health issues of infertility, early menopause, miscarriages, cancer, rashes; women who fish in waters polluted by Chevron; who drink Chevron polluted water because there is no other source of drinking water; women whose traditional means of livelihood of farming and fishing have been destroyed by chevron oil business activities. The women who confronted Chevron years back over the injustice perpetrated by Chevron in their communities.

The report quotes Okon further on the dangers women face from the flares:

Women in the communities near the gas flares experience high rates of infertility, early menopause, miscarriages, cancer and skin rashes. Think about the loss of an expected child. Think about young women having difficulty with pregnancies. Think about watching your family members become ill in a places where there are no health facilities.

Laura Livoti, founder of Justice in Nigeria Now, echoes Okon’s concerns and charges that what Chevron is doing is not only dangerous and immoral, but also illegal:

Gas flaring harms global health through the emission of greenhouse gases which cause climate change. It harms local health by releasing toxins that can cause asthma, cancer, respiratory illnesses, rashes and other diseases. Plus, the acid rain that results causes soil infertility, lower crop yields and hunger. Flaring gas that can cause these harms is immoral and Chevron management knows it. Plus, it’s illegal in Nigeria and has been since 1984.

Livoti, Okon, and other activists are motivated by the success of a case brought against Chevron by residents of  remote parts of Ecuador’s jungles, including many strong women, in which the company was ordered to pay $9 billion in damages.

Despite this major victory, and the victory of the 22 speakers at today’s meeting, advocates must continue their hard work. Chevron has not yet agreed to pay the fines in Ecuador, and it has made plans to expand its oil ventures to other ecologically and culturally delicate areas. But activists such as Okon have demonstrated that they will not back down until their voices are heard and their grievances addressed.

You can support their fight for justice by sharing their Alternative Annual Report [PDF] and signing this petition to demand Chevron make amends in Ecuador.